A Nation of House Arrest 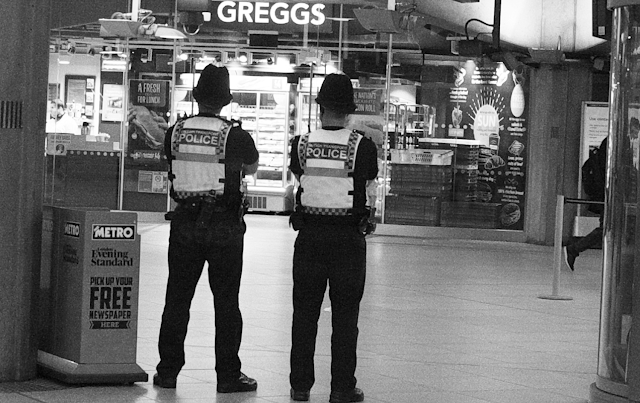 This article was originally published in Bournbrook Magazine on 27.03.2020.

I was not born with a natural instinct for liberty. Growing up under Blair, anti-terrorism measures were a normality. For the most part as a boy I did not see anything wrong with the idea of surveillance cameras or identity cards, or see much point in a right to privacy. No doubt from a tyranny we would have much to fear, but under a liberal democratic government who could complain?

But as the years passed I developed a suspicion of the State - its niggling and nannying, and omnipresence in every aspect of English life. And I began to question many things. Why were firearms being taken from the people but given, at an increasing rate, to the police? Why didn't anyone see anything wrong with this? Why did I trust the Government with my every whereabouts and internet history? What gave them the right or wisdom to take this information? Where was the line drawn between the Government serving us, and us serving the Government?

And so I garnered a mistrust of power which really should have been imbued in me since birth. But many of my fellow Blair babies, who have not undergone such a process, remain powerless to authority and conformity, for it is all they have ever known.

It seems nowadays in the United Kingdom state power is pretty much unlimited; any increase can and will be justified with calls for "safety" and "security", the British public will roll over like puppies, and dissenters will be accused of carelessness, shunned and abused. At least this has been our recent experience. In a matter of weeks, we have transformed from a free country to a nation of house arrest. Even if you support Boris Johnson's lockdown measures, you must agree the speed at which this has happened is disconcerting.

I'm sure men in high places have noticed the ease at which the British population was subdued, and taken note. I wouldn’t be surprised if we see more crises like this in future, many of them exaggerated or fictitious, all calling for similar suppressions of our liberties. The can of worms first opened by Blair’s anti-terror legislation are now wriggling and writhing free.

When covid-19 emerged in China I was open to closing our borders like a real self-sufficient country, rather than the neoliberal colony we've become. Once the virus got here, however, I accepted the Government's earlier, level-headed, hands-off approach, in which schools were kept open and the economy kept afloat. But as might be expected from a bombastic, mindless populist like Johnson, we soon found ourselves darting in the opposite direction to appease the over-fretful housewives of the nation (who are sure to become the prudish informers of the new regime).

My own scepticism has been met with incredulity, even - especially - in right-wing circles. Modern minds simply cannot comprehend that you could dare oppose an action that would ostensibly guarantee safety. Who doesn't love safety? Critics are dismissed outright as "contrarians" - those who take opposite views because they enjoy them; as idealistic "libertarians"; or as selfish youths who have no care for the elderly. I am none of these things. I treasure the few mainstream opinions I hold - they make me feel like less of an outsider. I'm certainly not a libertarian - I'm a social democrat. And as a conservative it's only natural for me to bear a deep affinity to the aged. This lockdown won't even affect me terribly much from my countryside home. Nevertheless one Twitter idiot (twidiot?) felt the need to request that I cease breathing, in a comment he wisely thereafter deleted.

This is also the first time that I've ever heard the term "draconian" banded around in a positive sense, not only by the public, but by the media ghouls who greedily whipped up this frenzy in the first place. At the time of writing the papers and the news channels are nattering with glee: "Woman, 21, with no pre-existing conditions dies from coronavirus". I can't help but think "no known pre-existing conditions" would have been more appropriate, especially as we currently only have her family's suspicions to go on as to whether she had the disease at all. Anecdotal evidence at best, yet so rudimentary is the modern Briton's capacity for rational, sceptical thought, it's sure to contribute greatly to the general hysteria.

"Today, a hectoring press can discharge an avalanche of public scorn and abuse on anybody who steps out of line. Social media encourage a resort to easy answers and generate a powerful herd instinct which suppresses not just dissent but even doubt and nuance. Public and even private solecisms can destroy a person’s career. Advertisers pressurise editors not to publish controversial pieces and editors can be sacked for persisting. Student organisations can prevent unorthodox speakers from being heard ... We have made a leviathan of the State, expanding and harnessing its power in order to reduce the risks that threaten our wellbeing. The 17th century [sic] may have abolished absolute monarchy but the 20th century created absolute democracy in its place."

I can think of no better technical term for our current predicament than absolute democracy - the Mob, the Media, and the State working in perfect symmetry to the detriment of all freedom.

It is unclear to me that panicked, heavy-handed lockdowns are necessary to limit the spread of the virus, or that they have done so in the countries where they have been implemented, such as China and Italy. Cases may decline in these countries, but correlation does not imply causation. Additionally, there are countries like Japan that appear to have avoided the worst effects of the virus without becoming draconian.

Profs. John Ioannidis and Sucharit Bhakdi, in a recommendable article and YouTube video respectively, have pointed out that there is no reliable data to suggest that covid-19 is any more dangerous than ordinary seasonal coronaviruses. And it's far from a case of "better safe than sorry". Not only does this lockdown establish a terrible precedent for state power in this country, but it may bankrupt our economy. My cousin has already lost her job; my mother may too, God forbid, before long - and if she does she'll lose her house. Social conservatives had a right to call out neoliberals for placing profits over people when this disaster began, but I can't help but think we've gone too far in the other direction. Profits, at the end of the day, keep people alive, and we may in the end lose more to recession than covid-19.

How did this happen? I must return to the subject of liberty. It seems to me that it is useless to enshrine freedom from the State in various special laws, charters and constitutions, while the people themselves do not particularly care for or understand it. Human beings are weak, cowardly, irrational creatures, who will ordinarily side with what's easy and what will keep them - or at least make them feel - safe. It takes a strong cultural appreciation of liberty for the value to survive.

In the modern day this is most clearly to be found in the United States, at which we in England often jeer. Yet we forget that America's culture of freedom is derived directly from our own; the early American revolutionaries sought merely the rights they felt were entitled to them as Englishmen. America's Bill of Rights was modelled on our own of 1689 - indeed it could be said the Glorious Revolution was our equivalent of the American Revolutionary War, for was it not the foundation of our own crowned republic? Yet while all Americans know and celebrate the struggle of the Patriots and the Loyalists, our own Revolution has been utterly forgotten by most English people. This has been part of the larger vanishing of our culture of liberty that once stretched back through the Glorious Revolution to the Civil War, Magna Carta and beyond; to the earliest Saxon kings who swore service not to their crown, but to their people. Liberty was once the very essence of Englishness; deeply entwined with our history, customs, law and constitution. Modern Englishness is the very opposite - nationalised services like "our NHS" or "our BBC" are some of the few things we're still allowed to be patriotic about.

There are a few explanations for the change. History education in most English schools has generally shifted from a national to an international focus in the last fifty years. Those lessons that do feature England all too often avoid politics to detail such dreary topics as "what kind of shoes did a mediaeval peasant wear?", and so forth. The result is that we have several generations of Englishmen who have only a half-awareness of our great national story, of resisting tyranny at home and on the continent. But they can tell you all about Mahatma Gandhi, or what a portcullis is.

Additionally, before the First World War an Englishman may have gone through his life quite free, only ever encountering the State on the face of coins or in his Royal Mail postman. Afterwards however, State influence was everywhere, and this effect doubled if not tripled with the "war socialism" of World War II. Having been the first country to industrialise, with both a class system and an entrenched industrial bourgeoisie; we were perhaps more susceptible to mass socialist movements than America ever has been. That said, it is important to note that our class system, while often maligned, was always more flexible than those of the continent - recall that the commoner Geoffrey Chaucer was brother-in-law to the prince John of Gaunt.

Regardless, England's deep-rooted cultural appreciation for liberty is now quite dead. We barely had the national gutsy to achieve freedom from the EU, and what's the use in securing liberty from a foreign government if we do not have it from our own? As such, the armour against the State at which our ancestors spent many gruelling centuries at work will slowly be chipped away, and each generation will grow up in a slightly less free society. Without a proper History education the children of tomorrow will never know what they have missed. They will be just as casual about house arrest as I was, growing up, about mass surveillance. I dread to think what the children of the day after tomorrow will find "normal".