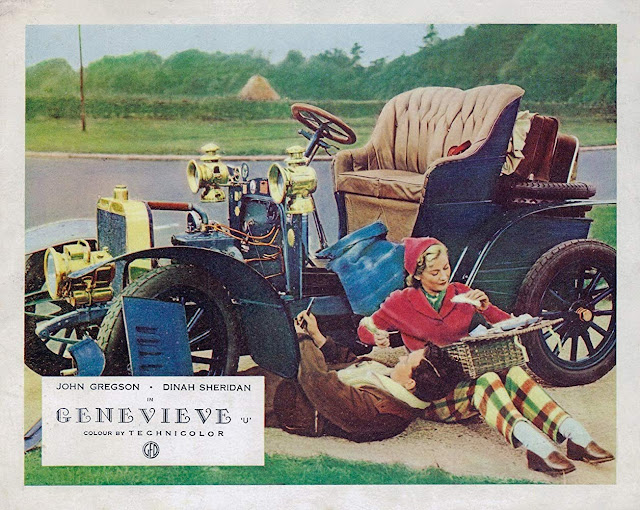 There are certain films, such as Kind Hearts and Coronets (1949) and Genevieve (1953), which encapsulate for me everything Englishness is supposed to be. You could say these visions of England do not represent the country as it is today, in which case I'd agree with you. Traditional England does yet exist in certain hidden, out-of-the-way places, such as Corfe Castle in Dorset, or Sibton Park Estate where I recently stayed with my entire extended family, but it is ever being encroached upon by modern, bland, bureaucratic England - the country where worship of the NHS has replaced veneration of Trafalgar, where English Protestantism has been replaced by half thought-out "progressive" dogma. Old England was individualistic yet community-rooted; modern England is almost the opposite - individualistic in a lonely, neoliberal sense, and debased of any form of community other than the powerful state and its ever-widening bureaucracy.

You may say I am too young to know of this earlier England, but I would dispute that. I grew up in a small village - a commuter village, but it yet bore some lingering elements of community. I attended a Church of England primary school, housed in a Victorian building; we celebrated the Nativity and in the Harvest festival would take our goods to the village church. The vicar would sermonise at our school in turn, and host garden parties. Certain families who had lived in the village since time immemorial, such as the Unwins, were still there. I wonder how much of all this has survived, although at least I know they still play cricket on the village green.

Not only this, but I have grandparents who kept the past alive for me. They remember Victorians, and passed on the old family traditions, stories and legends, such as our apparent descent from an Earl of Rebow (most likely referring to the Rebow family of Wivenhoe House in Essex). My great-grandfather died when I was too young to remember, but relics of his existence permeate strongly my grandparents' house in King's Lynn, and thus he and the culture he grew up in surrounded me like a mist whenever I visited in my developing years.

I was raised on old-fashioned films like The Wizard of Oz, Snow White and the Seven Dwarfs, Sleeping Beauty, Mary Poppins and Chitty Chitty Bang Bang, and old-fashioned books like The Chronicles of Narnia. I could go on. This isn't to say my childhood was a total anachronism. Far from it. My father raised me on vapid rock music I have since grown to despise. I experienced much of the early millennium as English children of the time experienced it; my mind is full of memories of Iraq, the War on Terror, New Labour, the Star Wars prequels, the Doctor Who revival, Rosie and Jim, Horrible Histories, et cetera. Not all of it was bad. But I treasure the memory I have of old England - as a member of generation Z it is my duty to continue its memory, precisely because I see how much the present is lacking.

But I digress. Believe it or not the primary purpose of this article is not to explore my backstory, but to discuss Genevieve itself. It's a charming and interesting film in so many ways, and there is much a young filmmaker may learn from it. What has always enamoured me to such things as Pirates of the Caribbean or Doctor Who in its David Tennant years, is the swashbucking nature of it all. This stuff has imbued me with a love of adventure, and a strong desire to go on one myself. The trouble with Pirates of the Caribbean and Doctor Who is that they take place in fictional, inaccessible worlds. They are frustrating in this regard. So I appreciated Genevieve for depicting a real life adventure that anyone with an automobile could try - a haphazard race across the English countryside, with all the people you could encounter and scrapes you could get into along the way. I find this depiction of a realistic adventure very life affirming - it is an attainable ideal rather than an impossible fantasy, and from it I will learn to endeavour to insert such achievable adventures into my own humble existence.

But another important aspect of the film is its depiction of marriage. The two central characters, Alan and Wendy McKim (played by John Gregson and the beautiful, stylish Dinah Sheridan respectively) make an adorable couple. The film depicts not only the joys of marriage, but the drama of GETTING THROUGH marital issues rather than just giving up, and the spiritual satisfaction derived from this - that being the spiritual satisfaction of monogamy; of dedicating one's life to another. I find this depiction of marriage utterly lacking in modern cinema and television. My mind is brought back to a comment by the conservative political journalist Ben Shapiro in 2017. Unfortunately I cannot find the quote to link to here, but I will try to recount it to the best of my ability. He compared the plots of two Western films - one old, and one modern. Both films are to an extent romances, in which a wife falls in love with a stranger. But in the former the wife dutifully stays with her husband; never once breaking her wedding oaths, and tearfully lets the other man go. Apparently all of this is relayed through body language rather than resorting to dialogue. In the latter, however, the wife and the stranger have sex. The former is not only ethically superior, but far more heartbreaking and beautiful - that is, superior on an artistic level. A film like Genevieve simply would not exist in the 21st century - the humour would be all swearing and lewdness, Wendy would have an affair with Ambrose, and Alan would find himself in bed with Rosalind.

In addition to the general moral degradation of our media class, writers simply do not have any restraint anymore, and know no subtlety. I am recalled to an article by Peter Hitchens from 2018, in which he questions,

"Why does the propaganda arm of our ruling class, the BBC, promote a drama called Wanderlust with publicity which, in the BBC’s own words, ‘asks whether lifelong monogamy is possible – or even desirable’. You know as well as I do that they’re not really asking.

They are saying, amid countless wearisome and embarrassing bedroom scenes, that it is neither possible nor desirable. This is a lie, as millions of honest, generous and kind men and women proved in the better generations which came before this one."

As a Filmmaking student I am subjected to this kind of trendy garbage constantly. Drama apparently only exists in nihilism - but we see from the Ben Shapiro example that it can exist just as much in duty, love and responsibility too. Inserting swears, sex scenes, and acts of violence and immorality into your film do not by definition make it more "grown up", as many filmmakers I have met seem to think. It's quite the opposite, C.S. Lewis pointed out,

"Critics who treat 'adult' as a term of approval, instead of as a merely descriptive term, cannot be adult themselves. To be concerned about being grown up, to admire the grown up because it is grown up, to blush at the suspicion of being childish; these things are the marks of childhood and adolescence. And in childhood and adolescence they are, in moderation, healthy symptoms. Young things ought to want to grow. But to carry on into middle life or even into early manhood this concern about being adult is a mark of really arrested development. When I was ten, I read fairy tales in secret and would have been ashamed if I had been found doing so. Now that I am fifty I read them openly. When I became a man I put away childish things, including the fear of childishness and the desire to be very grown up."
Labels: Film Politics