Why I've joined the Conservatives 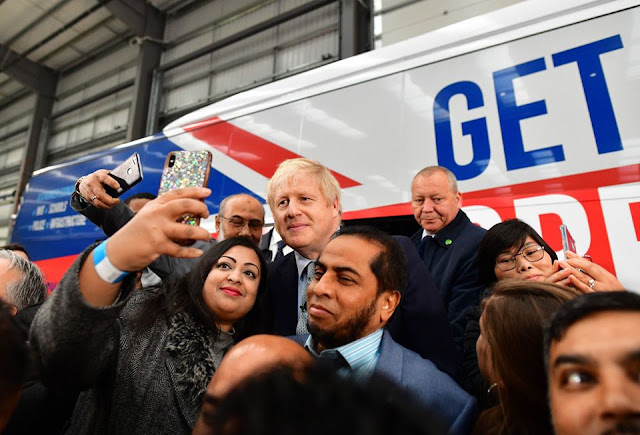 Last week, after a lifetime of being a small-c conservative, I finally bit the bullet and joined the Conservative Party.

For years I've supported the arguments of Peter Hitchens, elucidated in such excellent works as The Broken Compass (alternatively titled The Cameron Delusion), that the so-called Conservative Party is only conservative inasmuch as it exists to conserve the ruling class. This is its sole unfluctuating principle - so long as it can continue to provide political office for the sons and daughters of gentlemen, it is willing to embrace any liberal or left-wing idea you'd care to name. When it is not repurposing Labour policies with a blue finish, it's worshipping at the grave of Thatcher - a self-admitted Gladstonian liberal in conservative clothing. Genuine conservative thinkers from working or middle class backgrounds, like Sir Roger Scruton or Hitchens himself, are kept at arm's length, while non-conservative gentleman's sons like the social liberal Boris Johnson or the Blairite Cameron find themselves as Leaders of the Party.

This ideological barrenness is excused by the Burkean maxim that conservatives must adapt to survive. But one must question how far conservatives can "adapt" before they cease to be conservatives at all. And meanwhile no matter how debased and unscrupulous the Tory leadership gets, its for the most part genuinely conservative grassroots continue to support the Party like sheep. Yet, change may be on the horizon.

As regrettable as the destruction of British industry no doubt is, in our modern service economy the old division of economic Right versus economic Left is largely redundant. The first political faction to realise this was New Labour in the 1990s, which abandoned traditional economic socialism in order to focus on such things as social liberalism, multiculturalism and European unity, thus alienating their traditional working class support base which was most negatively affected by these policies. The election of Jeremy Corbyn as Labour Leader somewhat reversed this, but even then I suspect many of his supporters are rebellious middle class youths.

Some of these disillusioned working class voters ended up joining UKIP or the Brexit Party, necessary forerunners to a change which must happen in the Conservative Party. For the most important political divide in Britain today is not between capitalism and socialism, but between Leave and Remain, and our two-party system must represent this.

It's not just about the EU, though that is the issue on which the division was initially made. Leavers are not only eurosceptic, but generally urban, working class, anti-multicultural and socially conservative. Remainers are not only europhilic, but generally suburban, middle class, pro-multicultural and socially "progressive". These are massive generalisations, of course. Middle class rural conservatives have always been eurosceptic, some working class anti-Zionist sorts continue to stick to the anti-Tory, pro-EU Labour whip, and many people are just freethinkers. I'm a Leaver from a middle class Remain family, for example. That said, such generalisations (like the now-infamous, rather snobby label "Workington Man") are immensely useful for targeting certain segments of the population and winning their votes. And in this general election for the first time in history the Conservative Party has a chance at stealing the working class from the Left and thereby heading in a radically different direction.

Finally, we have the opportunity to transform the Conservatives from an unprincipled vehicle of the ruling class to a popular genuinely conservative movement.

It would not be the first time in history that the Conservatives were the party of the ordinary worker. In the Victorian era the Tories under Benjamin Disraeli were the favoured party of the voting poor while William Ewart Gladstone's free market Liberals were supported by the middle class. Disraeli called his brand of popular Toryism "one-nation conservatism", because he sought to avert the splitting of the British people into two nations of rich and poor. I do think that, weirdly, the working class and the upper class are natural allies against the liberal bourgeoisie, then as now.

The Tories have never really regained this popularity with the workers. Towards the end of the nineteenth century and at the beginning of the twentieth they became the party of free enterprise while the Liberals, influenced by such thinkers as Thomas Hill Green, introduced the early foundations of the welfare state (before being replaced by Labour). Thereafter no matter how social democratic the Tories were, even if they won plenty of elections, it was impossible for them to out-socialism Labour for the support of the working class. Finally they stopped trying, and embraced Thatcherite neoliberalism.

Now the neoliberal consensus is showing the first signs of faltering. What was once promised as a key to global peace has rendered the West defenceless as China takes our outsourced jobs and buys our resources and industry (such as British Steel, recently sold to the Chinese firm Jingye). The European common market not only saps our national sovereignty but plunders our fishing waters and provides the wealthy with cheap labour which makes British wages plummet. Privatisation, austerity, multiculturalism, and female wageslavery have torn the heart out of communities and left Britain a confused, purposeless mess. Meanwhile as our police transform into an armed, elitist gendarmery our proper Armed Forces crumble. All these issues would have once been the purview of a strong, communitarian, social democratic Left under a leader like Attlee. But the innate paradox in the socialist movement between genuine workers' advocacy and elitist utopian idealism has finally caught up with the Labour Party - they struggle to be eurosceptic, or patriotic, or socially conservative as their working class supporters want them to be, when the champagne socialists want them to be europhilic, globalist, and socially progressive.

And so the working class are up for grabs. The Brexit issue has finally released them from age-old tribalistic party loyalties, but it will take a bit of persuasion to get them to vote Conservative. The Tory Party needs to firmly reject Thatcherism and embrace one-nationism. Boris Johnson is a ruling class liberal Tory of the sort of I disdain; I agree with David Cameron that he probably only supported Leave to further his political career. That said, he has propelled his Party in an uncompromisingly Brexiteer direction, and clearly has some social democratic tendencies. His eccentric persona, though largely exaggerated if not outright fake, is widely popular with ordinary people. He could very well win the Leave (and therefore working class) vote for the Conservatives.

For the Conservatives to replace Labour as the party of the working class would be revolutionary, as significant as the great realignment of American politics which saw the Democratic and Republican parties effectively swap sides. As a one-nation conservative myself, my hope is that it would kill the unprincipled classism of the Conservative hierarchy, and re-introduce social democracy, protectionism, communitarianism, patriotism, social conservatism, and of course fierce Brexitism to mainstream Conservative thought. Meanwhile many of the Conservatives' traditional middle class voters would no doubt leave the Party for the Liberal Democrats, and take their Remainism, progressivism, and neoliberalism with them. The House of Commons would thereby be "updated" to represent the real political and social divisions of modern Britain - not between capitalists and socialists, but between one-nation Conservatives and neo-Liberal Democrats!

This upcoming election is our greatest and perhaps last chance to achieve this realignment. It is in many ways a second EU referendum, which is another reason why I'm backing the Tories. I voted for the Brexit Party in the May European elections. This was at a time when it seemed the establishment, Tory, Labour and Lib Dem alike, were slowly suffocating the Brexit process. Brexit Party victory in that election was necessary to push the Conservatives in a resolutely Brexiteer direction, which saw its flowering in the election of Boris Johnson as Conservative Leader shortly thereafter. But that was only the first half of the procedure. Now, a resounding Conservative victory is necessary not only to consolidate one-nation Brexitism in the Conservative Party, but to guarantee Brexit under Boris Johnson's sensible deal. The Brexit Party will only frustrate this.

The alternative outcomes are twofold. The Tories will easily lose seats in their suburban heartlands to the Lib Dems; if they do not manage to steal the working class as I hope, then they could return to Parliament with a decreased or only slightly increased majority. The deadlock in Parliament would continue. Alternative to that, while Labour gave up any hopes of winning a majority government to the SNP long ago, the dreaded Remain coalition of Labour, Lib Dems, and SNP is unlikely but not impossible. Either way, if the Conservatives do not secure an outright majority an actual second referendum will be on the cards, with catastrophic results for our country. As I have described in a previous article, Brexiteers may try to boycott it; and what then? Our democracy would be broken and unfixable.

The choice for me, then, is quite clear. Order versus Chaos. Change versus Stagnation. I have joined the Conservative Party both to support it in this decisive election, and to encourage it in a positive, democratic direction.

Plus, youth membership is only a fiver.


Footnote (added 13.12.19):
What a result! Despite only increasing their vote share by 1.2%, the Tories have been able to attain victory in working class areas as I hoped. Now two paths are open ahead of us: if we all promptly forget about Brexit in the post-Brexit world, the working class may return to Labour, my one-nation dreams will be dashed and it will be same old, same old. Alternatively, the old Leave and Remain divisions may yet be relevant. Just as in the newly independent United States of the 18th century, when American politics was divided between Britain-friendly Federalists and France-friendly Democratic-Republicans, so too may the newly independent Britain be divided by America-friendly Brexiteers and EU-friendly neo-Remainers. Between Anglo-Saxon, common law America and German, civil law Europe, I know which side I'll be on.

Additionally, I'd like to point out a few inadequacies in this article. On the day I published it it was just becoming clear to me that the Liberal Democrats weren't going to do well after all. I am tempted to speculate they may be more successful under a less inept leader, but in a post-Brexit Britain who can say? Now many of the Blairites have been dethroned from the parliamentary Labour Party, perhaps that Party will only drift further into the hands of Momentum. I come from a sickeningly middle class Remain family that hate Brexit but hate Jeremy Corbyn even more; so perhaps the Lib Dems could cater to them. That said, maybe middle class voters like my family will just return to the Conservatives once the Remain cause is truly lost.

Also, for simplicity's sake I made a strong correlation between being working class and supporting high public spending, and perhaps I trumped up my own one-nationism just a little much simply to get across my point. I don't think we should patronise the working class in this way generally. Even Thatcher achieved her greatest majorities when the workers were on her side; these working class Thatcherites were later snobbishly parodied by the "Loadsamoney" caricature. In any case it proves that libertarian, pull-yourself-up-by-your-own-bootstraps politics can be sold to the electorate if you genuinely and unapologetically believe in it, which nobody really does in today's political climate. Maybe Cameron would be less ill-remembered, by the Right at least, if he hadn't been so ashamed of his own austerity.
Labels: History Politics