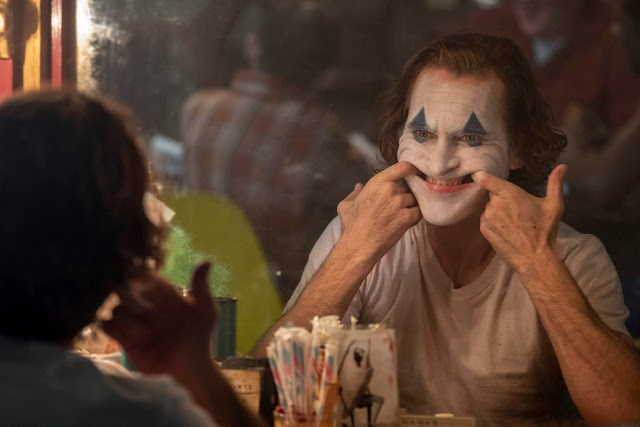 Last Wednesday had two highlights for me. Watching Joker and befriending a neighbourhood cat on the way back home.

It was soft, pretty and friendly. That's my review of the cat. As for the film itself, I have tried to avoid other reviewers before coming here. In this toxic political climate people have been reading all sorts into it; such as that it's some kind of "incel manifesto". I heartily disagree (spoilers ahead). Arthur Fleck's creepy interaction with Sophie Dumond (Zazie Beetz's character) is there from the very beginning and is not caused by her in any way; it's more a result rather than a cause of the Joker's illness/philosophy/whatever you want to call it. Therefore I don't think it's accurate to say, as some journalists have, that the film blames personalities like the Joker on rejection by women.

That is not to say the film doesn't explore interesting sociopolitical themes. And it's beautifully directed. There are subtle touches of purple, orange and green (the Joker's iconic colour palette) hidden throughout the picture, quietly but excitingly hinting at Arthur Fleck's destiny to come. A lesser director would have garishly spray-painted the whole thing with those colours, but Todd Phillips and cinematographer Lawrence Sher hold their ground. They know exactly what kind of film they're making and stick to this unique vision committedly.

I have mixed feelings on gore in cinema. I'm sure it desensitises us to real violence to some extent; but perhaps this effect is mild compared to the great fun that can be had with it in art. It's not often I would say this, but the gore in Joker is beautiful. My favourite scene, sadistic as it might sound, is when Robert De Niro's character, the slimey chat show host Murray (or "Mur-ray") Franklin, has his brains blown out by the Joker. This scene is excellent in so many ways, but that shot to the head on national television seemed terribly realistic. I've seen footage of real life assassinations and they look just like that - the body flops over backwards, made limp within a single moment.

And then there is Joaquin Phoenix's performance, which carries it all. No matter what ghastly things his character does, somehow he remains likeable (and even, to many audience members, funny) right to the end. This is vital for any anti-heroic story, especially one which ends with the anti-hero's triumph (unusual for the genre).

There is something a little conventional about Joker, however. "Bad things happen to man. Man becomes bad" is an exceedingly common archetype, visible in practically any villainous origin story you'd care to name. I would like to see a story in which a villain or anti-hero does bad things for no reason other than that he's a horrible person. "Someone with a comfortable life and no excuses becomes a mass murderer". I think American Psycho is the closest I've seen a film come to this.

My point is Joker is an age-old story. It needed to be this way, but by modern standards after years of anti-heroic TV & film perhaps it's become a little conventional. But the Joker was one of the originals, so it's fine. It's always an interesting story to tell, and this is by far one of the best tellings of it in recent years.

As a Chaplinhead I adored the various references to the man, which were perfectly apt. After all, Chaplin's Little Tramp was not only a great clown but a symbol of the failures of the American Dream - though his never-give-up hopeful-through-suffering attitude of "Buck up - never say die. We'll get along!" is more akin to that of Batman than the Clown Prince of Crime.

The failures of the American Dream is a prominent theme. Arthur Fleck is like so many people in this community-less neoliberal age (and perhaps this is where the references to inceldom are not unwarranted) alone, mentally ill and miserable at the bottom of society. Like so many of us he spends his hollow life gazing upwards at the stars - at patrician billionaires like Thomas Wayne with bloated senses of their own importance, and charismatic yet careless chat show hosts like Murray Franklin and his charming celebrity guests. Yet when Fleck finally confronts these heroes of Gotham City, they respond with indignity and disdain that someone so lowly should dare call them out. It's a potent reminder that celebrity is a one-way street, and that it can be difficult and uncomfortable, when you're happy and successful, to consider the situations of those far less fortunate and glamorous.

The inversion of Thomas Wayne's character is particularly brilliant. We rarely question the immense, intoxicating wealth of the Wayne dynasty when we're looking at this story from Batman's point of view. Joker allows us to see it in a new light, and gives us a certain understanding of the villain's motives in his later interactions with the Caped Crusader (whose identity, in most iterations of the story, he tends to figure out). I can just imagine being Phoenix's Joker and resenting the privileged vigilante who becomes the darling of Gotham City by kicking the underdogs' faces into the dirt - truly the epitome of everything Arthur Fleck came to hate.

My friend Elliot (of The Ood, the Bad and the Ugly fame) disliked Joker, describing it as, I quote, "Haha he got schizophrenia he sick laughing innit". He felt it wasn't a very interesting depiction of mental illness. To me, the film is more about poverty (financial and otherwise) and loneliness. I interpreted Fleck's imagined relationship with Sophie Dumond as a knowing fantasy rather than some kind of hallucination. I'm not denying there isn't something mentally wrong with Fleck, as his pathological laughter demonstrates, but to me, as with Sophie Dumond, it seemed more like an effect rather than a cause. And like Jordan Peterson, I would question anyone with a life as tragic as Fleck's who did not have a degree of mental illness, anxiety or depression. That's not craziness - with a life so tragic being slightly unhinged is only logical and realistic. The YouTube channel Wisecrack also makes the point, "It's a cop-out to say the Joker is mentally ill. The common classification of the Joker as insane seems to just be a way of demonstrating how little we understand about how his mind works". "What makes the Joker violent, in other words, isn't a psychiatric problem. It's an existential one. He is pathologically sane, and he's seen how fragile conventional morality is. He believes that no one is more than one sufficiently bad day away from total depravity". But more on that later.

Being on the bottom rung of society, being lonely, being surrounded by nasty, selfish people. In a world for the rich and successful, who even thinks about the little man, with no job and no friends, suffering from cancer or mental illness? Nobody really. It's so easy to be forgotten in this society. You just want to cry out and be noticed. And that's what the Joker does. That's the penultimate scene of the film. All eyes are on him. He finally attains the fame and adoration he has always wanted, though not quite in the way he expected.

If the penultimate scene establishes the Joker, the final one establishes the rest of his criminal career which we are by now so accustomed to. Being locked up in Arkham Asylum, breaking out again - this is the stuff of the 1960s Batman TV show. The words of Heath Ledger's Joker come to mind, "I think you and I are destined to do this forever". And there is something darkly comic about seeing Fleck being chased up and down the corridor, his plimsolls stained with blood. This, as well as the dehumanising depiction of dwarfism in the film and the Joker's pathological laugh, I feel is a deliberate use of dark humour to demonstrate how close comedy really is to tragedy.

While I have tried to avoid other reviewers, I can imagine some of them are claiming this film is an incitement to violence; a call to anarchy. It certainly ends on that note, but I think it's acceptable for a piece of art to explore a particular philosophy or worldview its creators may not necessarily agree with. Such is the free market of ideas. I'm sure Todd Phillips does not actually recommend assassinating chat show hosts and ramming police vehicles. Joker, like any good anti-heroic story, is a Devil's advocate.

Wisecrack, that excellent YouTube channel that uses pop culture as a red herring to explore philosophy, has already made a comprehensive video on the Joker's worldview, referenced above, which I'll link to here. In a previous article, cheekily titled "Messianic Morrissey", I described two responses to earthly suffering (apart from to ignore it). To hope for a world without it (the promise of Jesus), or to embrace it with sorrowful beauty and self-deprecative humour (Morrissey's solution). To them I would like to add the response followed in detail by Joker, and perfectly summed up in the words, "I used to think that my life was a tragedy. But now I realise it's a comedy". Cheerful nihilism - laughing into the void. In this sense Todd Phillips' film is an effective, perhaps updated, exploration of this idea, and for the first time in cinema lets us see it from the point of view of its most iconic embodiment.
Labels: Film