The United Kingdom of Britannia


No doubt Scotland and Northern Ireland are soon to leave the United Kingdom. Brexit, it seems, will rend us apart. The UK's borders will be redrawn to those of the old Kingdom of England - that is, England and Wales. Welsh separation may very well follow, but in the chance that that is not so, and some semblance of pan-British nationalism is maintained between the English and the Welsh, I wonder what manifestation this new, depleted United Kingdom will take.

While in the run-up to the last Scottish separatist referendum the College of Arms suggested that the Union Jack would not have to be redesigned in the case of Scottish departure, I don't really think it's realistic to expect the Welsh to continue waving a flag that represents countries that have completely left the Union, while excluding Wales. The flag of the new UK would probably be some ugly combination of the flags of St David and St George, or perhaps a flag of St George with a little Welsh dragon in the centre.

As for the name - while "Kingdom of England" did for a less democratic time, the Welsh wouldn't stand for it nowadays. I wouldn't recommend the United Kingdom of England and Wales either - that would only serve to nurture separate English and Welsh nationalisms. My own suggestion is to revive the name of Roman Britain, a territory which encompassed the approximate modern boundaries of England and Wales - Britannia. That way we could continue to identify as Britons and nurture the shared Arthurian, Brythonic heritage of our two countries.

The Amazon is doomed for as long as ranches and logging companies are permitted to move into rainforest that has burned down. Starting forest fires is simply too easy and inconspicuous for people not to try it, and without some kind of new legislation this will go on forever until there's nothing left. The boundaries of the Amazon, after this latest disaster, should be constitutionally set in stone. If greedy ranchers and loggers burn it down, they should not be permitted to move in; reforestation attempts should take place on the destroyed land instead.

Have you ever watched a film that you hated until the ending? Throughout the majority of True Romance I was fairly bored. I assumed it was just another clichéd story of crime and doomed love, à la Gun Crazy or Bonnie and Clyde. But, spoiler alert, rather than ending in the deaths of the main characters as such a film ordinarily would, True Romance concludes with practically everyone else dying instead! The last scene even features our anti-heroes living happily ever after in Mexico. What a total, eccentric subversion of the genre - not only do the protagonists survive, but everyone else perishes, and they even accomplish their ridiculous, supposedly doomed Of Mice and Men-style dreams. A potent reminder to never quit a film midway through, because you can never truly predict how it will end. 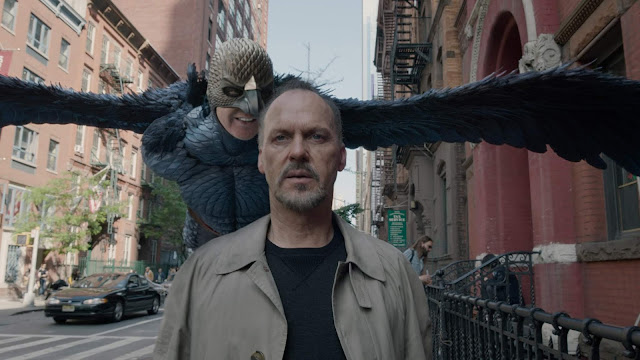 Birdman or (The Unexpected Virtue of Ignorance). I think critics just salivate over this film because of its cinematography gimmick and because the entire soundtrack is played on a single instrument. But... there's more to filmmaking than interesting gimmicks. The dialogue is self-aggrandising and pretentious and while I usually enjoy slice of life the story is just tedious and dull. Something similar could be said of director Alejandro G. Iñárritu's other "masterpiece" The Revenant. Style over substance.
Labels: Film History Politics Recent Ponderings