Star Trek vs Doctor Who 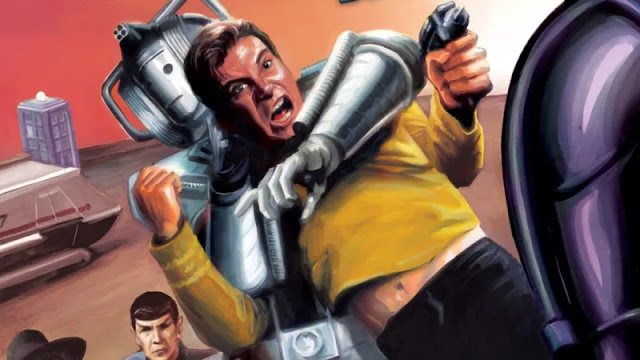 I fondly remember watching Star Trek when I was a boy. Mostly Deep Space Nine, but occasionally some of the other series too (Voyager, TNG, and TOS). This was before Netflix, and we didn't have terribly many TV channels in our household; among the few was CBS Action, which broadcasted assorted Star Trek series about the time I got home from school. Trek became a convenient light entertainment to take my mind off the invariably wearisome school day and the long walk home.

This is just one example of how I have now and again throughout my life dipped my toes into the Trekiverse. As a teenager I would idly watch The Original Series from time to time while staying with my Dad; I dressed as Captain Kirk for my first visit to a comic con earlier this year; and I watched Star Trek: Discovery with my university's Sci-Fi & Fantasy Society. In any case, while I have "dabbled" in Star Trek, the show has never had an effect on me quite like Doctor Who. I remain a Whovian rather than a Trekkie.

That said, I adore Star Trek's idealistic vision of an Enlightened future, in which the different races of Earth and the wider cosmos unite under the principles of reason, freedom and tolerance. I love the concept of Starfleet - that it is not a military organisation, but a diplomatic & scientific one, dedicated to exploring the uncharted universe for the benefit of all. Indeed, this scientific pacifism can be seen even in the smallest of props - the humble phaser. The phaser is brilliant because it is multi-purpose; it is as much a tool as it is a weapon, and even when used as such it has a "stun" setting.

Star Trek is a very American concept - a kind of space Manifest Destiny but with the genocidal, bad bits removed. Even the way it looks is idealistic; this can especially be seen in The Original Series, in which, apart from the pretty uniforms, even malevolent alien beings appear more often than not as beautiful rainbow cacophonies of extraterrestrial colour. TOS, especially now that it has been uploaded to Netflix in high quality, is visually gorgeous - the other Trek series can't compare in this regard*. It's just a shame that CBS felt the need to "update" the special effects with cheap-looking CGI. As a fan of silent films and Classic Who, part of the enjoyment I get from watching these old-fashioned media is the historical interest. You wouldn't "update" the effects in a Charlie Chaplin film, would you? So why do it for TOS? Anyway, but apart from that, to paraphrase Rich Evans, the appeal of Star Trek is that it's a world you'd like to live in. As well as its Enlightenment ideals it has a certain swashbuckle to it - a gleaming vision of a Second Age of Discovery, full of awe and adventure.


Despite all this, I still think I prefer Doctor Who's basic concept. Star Trek is far more slick, professional, American - on a conceptual level as well as a production one. Whereas Doctor Who, on the other hand, is quaint, humble, British. While he did have a brief stint begrudgingly working for the United Nations Intelligence Taskforce in the early 1970's, by and large the Doctor is not a professional hero, unlike the Starfleet Officers of Star Trek. The character holds the same ideals as Starfleet - reason, pacifism, tolerance. He/she doesn't carry a weapon (not even a phaser), but a humble screwdriver. Yet, the Doctor often falls short of their own ideals. We have seen, on occasion, the Doctor being irrational, emotional, violent, intolerant. Because the Doctor is not a professional, but merely a traveller - a "cosmic hobo". He/she doesn't go looking for trouble, but stumbles into it. In the paraphrased words of Steven Moffat, "The Doctor is the person the Doctor wants to be". It's an ideal to strive for, rather than a constant reality. And I think that's a fascinating way of depicting idealism.

While Star Trek is an idealistic fantasy, Doctor Who shows idealism through the lens of reality. It shows men falling short of their ideals, and ideals in the most bleak and hopeless of places. And I think that makes it far more useful as a concept than the utopian world depicted in Star Trek ever could be.


*Side-note: I mostly enjoyed the episodes of Star Trek: Discovery I saw, but I felt it missed a great opportunity. It's set only about ten years prior to the events of Star Trek: The Original Series. Now, as visually stunning and vibrant as TOS is, it was made in the 1960's, and therefore isn't exactly a realistic depiction of the future anymore. For instance, should the starship Enterprise ever come to exist, its control panels will most likely employ touch screen rather than buttons. Rather than explaining this anachronism, the creators of Discovery instead opted to ignore it altogether, and depict a mostly realistic future from an early 21st century point of view (a vision which will no doubt itself become outdated in time). Subsequently, the suspension of disbelief is ruined - how are we supposed to believe that the 21st century future of Discovery takes place only a decade before the 1960's future of TOS?

It's a wasted opportunity. The futuristic 2019 depicted in the 1982 film Blade Runner was very obviously outdated by the time the sequel Blade Runner 2049 was released in 2017. Rather than simply ignore the anachronisms of the previous film and depict an updated future, Blade Runner 2049 instead embraced retrofuturism, reimagining the Blade Runner franchise as taking place in an alternate future without touch screens or the internet. Not only does this justify the anachronisms of the previous film, but it also makes for a more interesting and creative depiction of the future. So much science fiction is bogged down by a desire for realism that I've had quite enough of the standard, bland, shiny touch-screen world to come. It's everywhere, and it was pleasant to see Blade Runner 2049 do something different. Discovery, if it was going to take place only a few years before TOS, should have taken the same path. It should have embraced retrofuturism, depicting the colourful, 60's space age of TOS in all its retro glory, perhaps explaining away the lack of touch screen with some kind of historical catastrophe that destroyed all the world's iPods. That would have been a far more creative thing to do, and in this post-Stranger Things era of nostalgia I feel it would have been a popular choice. But alas, Discovery went in the opposite direction, even going so far as to replace the iconic rainbow uniforms with boring blue boiler suits. Thankfully it appears the show has backtracked and introduced a bit of colour in season 2 (with the introduction of the Pike-era Enterprise), but it's far from the true retrofuturism that would seal the vast gap between Discovery and the rest of the Star Trek universe.
Labels: Doctor Who Film Television