Why Game of Thrones is still great (ish) 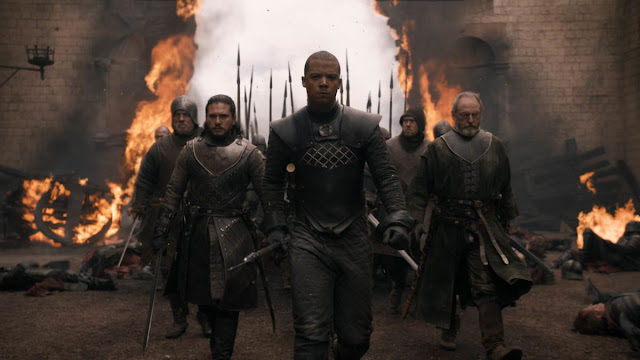 Am I the only person in the world who has generally enjoyed season 7 and season 8 of Game of Thrones? I thought that Arya killing the Night King was a satisfying conclusion to her character arc. I felt Jaime having a fling with Brienne before returning to King's Landing to die with Cersei both acted as a catharsis for his deepening relationship with Gwendoline Christie's character, while also being deeply romantic in the fact that despite his redemption he was still loyal to Cersei. And Cersei always had one solitary good streak in her - her love for Jaime and her children, so their collective deaths were fitting and beautiful. Especially fitting at the hands of Daenerys Targaryen.

Long ago at the beginning of the series Cersei remarked that she and Jaime were guaranteed the Throne because they were the only ones who would do anything to get it. Cersei failed because she underestimated Daenerys - Daenerys was always the one person more determined for the Iron Throne than her. Her tendency to ruthlessness was established early on - always implied in her Eastern upbringing, and first seen in her crucifixion of the slavemasters of Meereen; then later witnessed at her burning of Samwell Tarly's father and brother. In the end, it was her heartbreak over Jon Snow's rejection, coupled with the revelation that her entire life goal and purpose was based on a lie*, and finally the death of her closest friend Missandei that tipped her over the edge.

*This is excellent, by the way. Because we see her life story from her own, inherently biased point of view, the audience are duped with her into believing that she has some kind of special destiny to be Dragon Queen of the Seven Kingdoms. She brought the dragons back from extinction, did she not? Twice she emerged from the flames untouched. Why shouldn't she be destined to be Queen? In a fantasy TV show, we don't apply real world logic and let ourselves be taken away by the magic. But Game of Thrones is brilliant because while it undoubtedly does feature magical elements, it includes brutal real-world physics where you least expect it. With the revelation that it is not Daenerys after all, but Jon Snow of all people who is the actual heir to the Iron Throne, the entire Daenerys subplot is thrown on its head. We, the audience, are made fools of as it's revealed that the whole "Mother of Dragons" thing was just a load of superstition after all. The dragon eggs hatched for her coincidentally, and as a Targaryen she is naturally flame-resistant. She is no more destined to be Queen of the Seven Kingdoms as I am to be King of Ireland just because I found a four-leaf clover.

Maybe season 8 has been a little rushed. I don't know why they decided to have six episodes instead of the usual ten - perhaps it was a financial decision on the part of HBO. And while I agree that Arya should have been the one to kill the Night King, it did seem a little convenient that this resulted in the immediate annihilation of all the White Walkers and the entirety of the Army of the Dead. I'm very much bored of the all-too-common sci-fi/fantasy trope of a "hive mind" - it's a much too convenient route which allows writers to easily solve threats from mass antagonists. In this case it allowed the Army of the Dead threat to be solved by killing one, apparently mortal person (the Night King). By doing so you take all the invincibility of an immortal army and turn it into the vulnerability of a single man. Another example would be in the generally enjoyable 2012 Doctor Who episode "Asylum of the Daleks", in which the "good Dalek" Oswin erases all memory of the Doctor from every Dalek in existence by altering their "telepathic web". Again, it seems you're diminishing the threat of an entire race of antagonists if you say they can all be defeated by dealing with just one of them.

Doctor Who doesn't always fall for the "hive mind" trap, however - in the 2006 episode "Doomsday", the leader of the Cybermen is destroyed. Does this "deactivate the Cyber hive-mind" and cause all Cybermen to shut down? For a lesser writer this would have been the case. But instead the Cybermen merely upgrade a different Cyber unit into a new Cyber-Leader and carry on. This, I feel, makes them feel much more of a threat - if you kill their leader they will simply create a new one without much bother. Even if the Night King had been assassinated, why didn't another White Walker simply take his place, and become the new Night King? I feel that would have been much more interesting, and would have required the writers to come up with a more clever solution to the "Winter is coming" plotline. But, instead, as soon as the Night King dies all the White Walkers simply explode and the Army of the Dead ceases to function. It's the "hive mind" trope at its worst. Additionally, it confused me that the writers chose to deal with the Army of the Dead before dealing with Cersei. It always seemed to me that Winter was the real threat, and that the game of Thrones was merely a petty human distraction from the oncoming apocalypse. So the fact that the Night King died before Cersei doesn't make much sense to me. Even now the Night King is dead, where is Winter? Why is King's Landing still so sunny and bright, when previously in the series we have seen premonitions of the Throne Room surrounded by snow?**

Another quibble I have with season 8 is how easy it was for Daenerys and her armies to defeat Cersei. The ending of season 7 implied that taking her armies to defeat the Army of the Dead was a sacrifice for Daenerys that would give Cersei the upper hand. It gave Cersei time to forge an alliance with the Iron Fleet and hire the Golden Company. For Cersei's forces - Iron Fleet, Golden Company, scorpions and all - to be defeated so quickly and easily by one dragon and armies of tired, worn-out soldiers that had only just survived the Dead hordes by the skin of their teeth, was very much unearnt. Not only this, but I don't feel it did Cersei, the ultimate survivor, justice. I would have thought she'd have one more trick up her sleeve. The same could be said for Varys. I always liked the Master of Whisperers - despite his sly, cunning ways he seemed always to have the interests of the realm and its people at heart, and I was disappointed to see him go so easily (that said, before his death he did write a mysterious letter that apparently revealed Jon Snow's true parentage. Hopefully this comes back to bite Daenerys in the backside). I always expected more of Euron Greyjoy, too, whose much-hyped fleet was ultimately so easily scuppered. I would have thought he and Cersei would have been a nigh on unstoppable force, but apparently not. In the end he dies pathetically in a shrill, pointless brawl with Jaime Lannister. Even Theon Greyjoy's death, who at least redeemed himself dying to protect Bran, felt a tad underwhelming. I simply think this season is so short, not enough time is spent to properly say goodbye to some much-beloved characters fans have spent years invested in. We've barely finished mourning Theon when suddenly we have Jaime and Cersei's death to process. Ned Stark had an entire season to lead up to his untimely demise - that's what made it so impactful. Season 8 in comparison has been a massacre, and after a while you cease to care.***

We have one more episode to go, and I'm very interested to see where they take it. I predicted in a previous article in 2017 that Game of Thrones would ultimately be a comedy (in the Shakespearean sense) rather than a tragedy - it would merely take an unusual (for a comedy) amount of bloodshed to get there. But Jon Snow's taking of the Iron Throne has by now been hyped up so much, it's starting to seem far too simplistic and convenient for a show which traditionally indulges in tragic, morbid and unexpected twists and turns. No, I think it would work much better at this point if we are led to believe that Jon will take the Iron Throne, but instead he is killed by Daenerys, who becomes the first of a new line of Targaryen tyrants. It would be a depressing, cyclical vision of history, but I think it would also be the best ending for the series. I do not think this will happen, however - if the Lord of Light brought Beric Dondarrion back to life so that he could save Arya's life (allowing her to kill the Night King), then he must also have resurrected Jon Snow for a similar reason. Unless I've missed something, that reason most likely will be that he is the Lord of Light's chosen to ascend to the Iron Throne.

Then again, it's awfully suspicious how closely Jon mimics his adopted father's pose in this season 8 promotional poster. Is this a clue? Will Jon repeat Ned's mistakes, and suffer the same fate? We await and see. 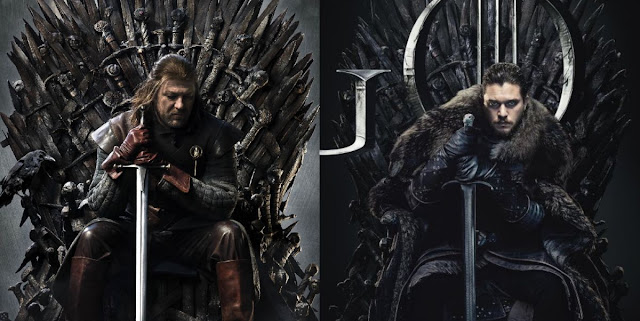 **Footnote: I had a look into this premonition from the second season. It turns out that the Throne Room was not only full of snow, but also drippled in ash. Perhaps, then, the premonition was not supposed to be taken literally - perhaps in Winter the snows do not come so far south. But possibly it was metaphorical - maybe it represents the final struggle for the Throne between Daenerys and Jon (Snow), and possibly foreshadows the Dragon Queen's massacre at King's Landing. 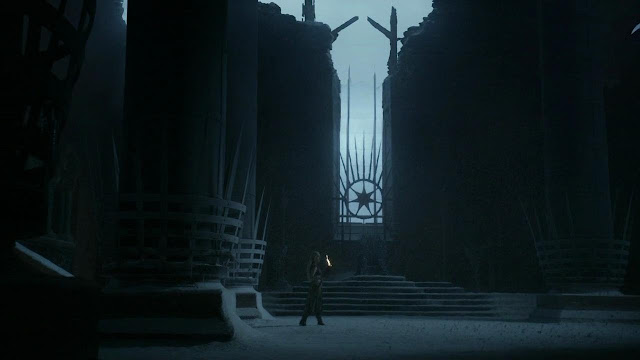 ***Yes, I realise the Red Wedding was even more of a massacre in comparison, but that event was impactful because all the beloved characters were killed off at once in a shocking season-finale twist. And there was plenty of time afterwards to mourn and take it in. But in season 8, the characters are killed off predictably, almost like a chore - one after the other, with little hype, effort, or mourning. There's no twist or impact - the writers are simply rushing it to tie up loose ends and hurry towards the finale.
Labels: Doctor Who Game of Thrones Television