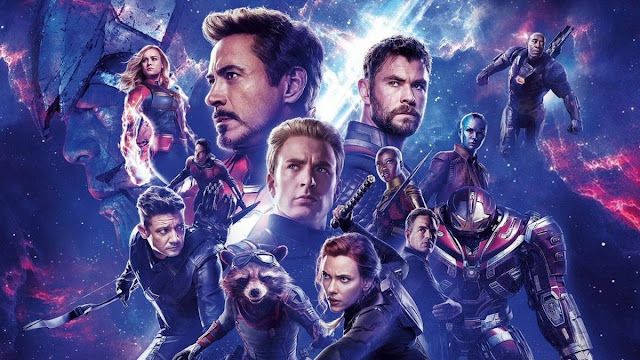 Last Sunday I gave in to peer pressure and went to see Avengers: Endgame. I'm not a Marvel movie person. Before 2017 the latest MCU film I had seen was 2011's Thor. Since then I've been doing a bit of catching up, which has meant watching:
Spider-Man: Homecoming
Black Panther
Guardians of the Galaxy
Avengers: Infinity War
Ant-Man and the Wasp
Avengers Assemble (known in the United States as The Avengers)
Doctor Strange
Captain Marvel

In roughly that order. It was probably unwise to watch Avengers: Infinity War before Avengers Assemble, but in any case I found both films boring. I don't really find fictional, computer animated action very enthralling. It's not real; it just doesn't work for my suspension of disbelief.

This is why I was pleasantly surprised that I actually enjoyed Endgame. It immediately subverts your expectations by killing Thanos within the first few minutes (I said spoiler warning) and then dawdles for a while as a fascinating, morbid dystopian film about what it would be like if 50% of all life disappeared. After this, it transitions into a fun time travel heist movie that playfully explores the history of the franchise - I really enjoyed this bit, although the constant use of the term "time heist" reminded me of the Doctor Who episode of the same name! However, the third act, in which the Avengers go up against a past version of Thanos and his armies*, I didn't enjoy so much. I'm not a fan of CGI action scenes but when they only take up the final act of a film I can generally let them pass. However, the resolution of the film confused me heavily, and left me as I departed the cinema with a bad taste in my mouth.

Everything was going so well; the time travel element of the film made perfect sense; until Iron Man killed past-Thanos with the Infinity Gauntlet. This immediately creates a temporal paradox. If Iron Man kills past-Thanos before he can use the Infinity Stones to kill one half of the universe's population, then Thanos' genocide will never take place, and therefore there will be no need for Iron Man and the Avengers to go back in time and retrieve the Infinity Stones in the first place, and therefore they will not attract past-Thanos' attention which ultimately led to this great battle and past-Thanos' death. It's the age-old grandfather paradox.

I know what you're thinking. Time travel films so often don't make sense when you subject them to serious scrutiny. Sometimes it's best to just push any scientific questions out of your mind to better appreciate the story. I wouldn't have nearly such a problem with this if Bruce Banner didn't make it exceedingly clear throughout Endgame that the grandfather paradox was impossible. That's the whole reason why, it is explained, the Avengers have to retrieve the Infinity Stones to bring everyone back from the dead (rather than just kill Thanos as a child and stop his genocide from happening in the first place). Even at the very end of the film, Bruce Banner sends Captain America back in time to return the Infinity Stones to their rightful places in history, with the explanation that history cannot be changed and that paradoxes are dangerous. Really? After they have literally just evoked the grandfather paradox in order to kill past-Thanos? Why return the Infinity Stones to their places in history when you've already messed up your own timeline beyond recognition? If temporal paradoxes had been allowed in the science of the film from the beginning, then I would have no bone to pick with any of this. It's only because the film establishes one set of rules at the beginning, and then breaks them in order to have a big dumb CGI battle with Thanos at the end.

Perhaps all this confusion will be resolved in future Marvel films. I take the scene with the Guardians of the Galaxy at the conclusion of the film, in which Gamora's location is depicted to be "unknown", as a sign of this (it is past-Gamora, because present-Gamora died in Infinity War. Christ, this is so confusing). If not, then Marvel may have just utterly destroyed the internal logic of a Cinematic Universe they spent eleven years creating.

But even if it is resolved in future films, is confusion really a positive emotion to leave a cinema with? Perhaps the serialisation inherent in the MCU is just taken for granted these days, and from now on we should treat films more like episodes of endless TV programmes than standalone self-contained stories. We'll watch one and never be satisfied until we've seen the next.

If past-Thanos died before he could kill 50% of all life, then would Tony Stark's daughter ever have been born? That was another important reason why Tony wanted to retrieve the Infinity Stones to reverse the genocide, rather than prevent it from happening in the first place. Yet it was him of all people who killed past-Thanos and started the paradox. But, in the face of all reason and logic, we see his little girl alive and well at the end.
This brings me to another criticism I have. For a while I thought the film was going to get to a point when simply retrieving the Infinity Stones from history didn't work, and that preventing the genocide from happening in the first place had become necessary. I mean, it did get to that point in a rather haphazard way, but I thought that this event would have caused conflict between Tony Stark (who couldn't possibly exchange the life of his daughter for the lives even of billions and billions of people) and the rest of the Avengers. I thought there would have been some kind of fight between Stark and the other Avengers, which he eventually, inevitably, doesn't win, and while 50% of the world comes back, his daughter disappears. Perhaps he even loses all memory of her. That, to me, seems like a far more interesting and heartbreaking story than the one we were given. Yes, it's the grandfather paradox again, but at least it's done in a more interesting way, and makes far more sense, than Tony killing past-Thanos with no repercussions at all to the safety of his daughter (or to anyone, really).
The same can be said for Nebula. There are two Nebulas in this film - past-Nebula and present-Nebula. At one point present-Nebula kills past-Nebula, with no negative repercussions to her continued existence. Indeed, at the end of the film we see her at Tony Stark's funeral. Wouldn't it have been so much more interesting if by killing her past self she was sacrificing herself, and all the moral progress she had made since 2014, to nonexistence? Ah, but I suppose Marvel want her for future movies.

Perhaps I'm just holding this film up to a higher standard because I'm a Doctor Who fan; because I'm so used to seeing how time travel can be used creatively to fashion fascinating narrative arcs that generally make a kind of sense. This film was enjoyable, no doubt. But it didn't have to break its own internal consistency to provide a satisfying ending, and there was so much more it could have done with the time travel theme, that I can't help feeling a little disappointed.


*Forgive me if I'm not well-versed in Marvel lore, but does anyone know where he got this army from? I kept asking myself why so many aliens would sign up to fight and die for a man who has promised to kill half of them and their families.
Labels: Film