Thoughts on The Expanse 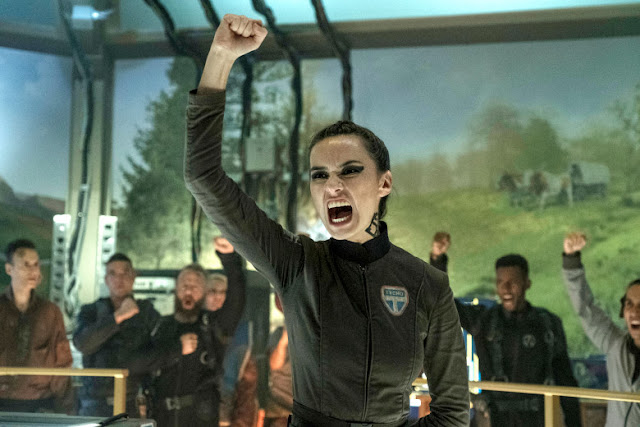 The Expanse is a science fiction programme based upon the book series of the same name by James S. A. Corey (a pen name for Daniel Abraham and Ty Franck, who also work on the show). Interestingly, it all began as Franck's attempt to create a massively multiplayer online role-playing game, and when that fell through, a tabletop RPG. It wasn't until Abraham suggested they turn it into a novel series when The Expanse was born, and later adapted to television.

I simply can't get across my adoration for this show. I watched the first two series when they were still on Netflix in early-to-mid 2018. It was a melancholy period of my life; I was staying at my Dad's flat after being banished from my Mum's house (where I lived at the time) due to an argument. I barely saw my then girlfriend as her parents disapproved of us and restricted our time together heavily. I was lonely and melancholy, and I have strong memories of the Spring sun coupled with sad songs by Morrissey - and of The Expanse.

It was a lovely bit of escapism. People think of the show as bleak, but I've always appreciated it for the opposite reasons. Yes, it tackles the issues of corruption, weapons trading, and international war over limited resources. But I think its vision of the future is otherwise optimistic. That is, it depicts a very 21st century vision of the future. As they say, science fiction reveals more about the present than it does about what is to come. The world in which The Expanse is set is accurate in the sense that it will be the future if the human race continues on its present, liberal-democratic course. It is a world in which a unified Earth is governed by a liberal-democratic (albeit sometimes corrupt or inept) United Nations, while Mars has since gained self-determination 1776-style as the liberal-democratic Martian Congressional Republic within a successfully colonised solar system. And it is a world in which the colonists of the asteroid belt are only just beginning to stretch their legs and lust for their own independence with the (albeit shady) Outer Planets Alliance (OPA).

It may be a liberal-democratic civilisation constantly poised on the brink of mutually assured destruction, but at least it exists in the first place. The more I observe modern tribalistic political discourse the more I despair of our political destiny. Sometimes the neo-feudalist future of Frank Herbert's Dune seems more likely to me than the liberal-democratic future of The Expanse. My opinion is we'd be lucky to achieve that latter future in the first place, let alone sustain it.

I would rather describe The Expanse as "swashbuckling" than "bleak". I grew very attached to the hapless mismatched crew of the Rocinante as they adventured throughout the solar system! For me, there's that same idealistic appeal about the future United Nations, the Martian Congressional Republic, and the swashbuckling adventures of the Rocinante, as there is, I imagine, for Star Trek fans and their United Federation of Planets, Starfleet, and starship Enterprise. It's the same idealism of an oncoming age of progress, adventure and discovery.

The clothing, the style, the general look of The Expanse's future, is likewise so relatable to our era that I doubt we would have changed so little culturally by the time Mars is fully colonised (which will take a while, to say the least). Ty Franck has insinuated the story of The Expanse takes place circa 2350. This sounds realistic to me in terms of technological development (it may even be an underestimate in that regard), but if one thinks of all the cultural development over the last 331 odd years (2019 to 2350 is the equivalent of 1688 to 2019) then The Expanse looks more like where we would be a few decades from now, not over three centuries! But part of the enjoyment of this sci-fi fantasy is its familiarity - it's part of that same idealism. This is our 21st century model of the future - it's our goal to strive for rather than an accurate attempt at prophecy. At least, that's how I interpret it anyway.

As the video linked to here explains, there is plenty of scientific realism in The Expanse, and this is perfectly subverted late in the first series when (I urge you to skip this paragraph to avoid spoilers if you haven't already seen the show) alien elements are suddenly introduced. However, it is interesting to me how the issues of human-made artificial intelligence and transhumanism are, for the most part, oddly sidestepped. I have written before on how I think artificial intelligence and transhumanism pose a huge threat to humanity and our way of life, yet there are few if any human-made robots or transhumans in The Expanse. Note how I stipulated "human-made". The alien protomolecule is obviously the great exception to this - The Expanse does an excellent job of exploring the protomolecule's awe-inspiring artificial intelligence, and the sheer body horror of the Human-Protomolecule Hybrids (genuinely frightening transhumans). Of course, the Hybrids are technically "human-made", yet they are still created with alien technology. All I'm wondering is why, three centuries in the future, there are not already billions of robots, cyborgs, and transhumans of purely human origin throughout society. Judging by the rate of technological progress, in robotics and bioengineering, I'd say The Expanse underestimates the impact AI and transhumanism are soon to have on our future - no alien influence necessary.

I'm not trying to criticise the show; I'm merely exploring how my prediction of the future differs from that of Franck and Abraham. Really, I couldn't recommend the show enough. I was hesitant to try it initially - on first impressions it seemed like a generic sci-fi, and I was a little daunted by the perceived corniness of the neo-noir detective plot in the first series (featuring the stereotypical hardboiled detective Josephus Miller). However, pretty much as soon as I started watching I was hooked. I even learned to love the corny detective plot, and Joe Miller evolved into a fascinating three-dimensional character. Indeed, the creators of the show seem to place great care in giving each and every character a redeeming trait or extra dimension - which is easier said than done with such a massive ensemble cast. I can't think of a single character I am not fond of or interested in in some way. I could go through each and every one. Even very minor roles have something endearing or intriguing about them.
The honourable hero James Holden, with the weight of the world (or worlds) on his shoulders.
The lonely detective Joe Miller, in love/obsessed with a missing girl.
The pally and loyal space cowboy, Alex Kamal.
Tough on the outside, sweet on the inside Amos Burton.
The noble and principled Naomi Nagata.
The wily no-nonsense politician Chrisjen Avasarala.
The conflicted patriot Bobbie Draper, who can't help doing what is right.
Tough as nails Camina Drummer.
The salty old pirate Klaes Ashford.
Reverend Doctor Anna Volovodov, torn between her obligations.
Et cetera, et cetera, et cetera. I love them all. Even the antagonists Jules-Pierre Mao and (spoiler alert) Sadavir Errinwright are fundamentally human. Whenever we see them they either believe in their convictions or are guilt-ridden and morally divided. You can understand their logic and how they came to make their wicked decisions - truly the hallmark of any great villain.

Series three, which I watched this year, was a little bleaker and less swashbuckling than the previous two. Midway through, the exciting international politics and schemes which I so love about the programme were replaced with an existential exploration of the protomolecule "Ring" (which is a bit of a Halo rip-off in all honesty). It was still great television and I continued to adore it, but it was not so much "my Expanse". Nevertheless, the series ended on a terrific cliffhanger, and I cannot wait for the fourth, which is being produced by Amazon Prime on a higher budget (hopefully). The Expanse was actually cancelled after the third series by Syfy. However, this was followed by a massive grassroots fan campaign, endorsed by various celebrities like George R.R. Martin and the cast themselves, which within a month caused Jeff Bezos himself to announce that Amazon Prime had picked up the show.

I'm proud to be a part of this fandom, and so glad I discovered this chronically underrated sci-fi masterpiece in those melancholy months a long, long time ago.
Labels: Television