The Sisters Brothers: a gentle Western 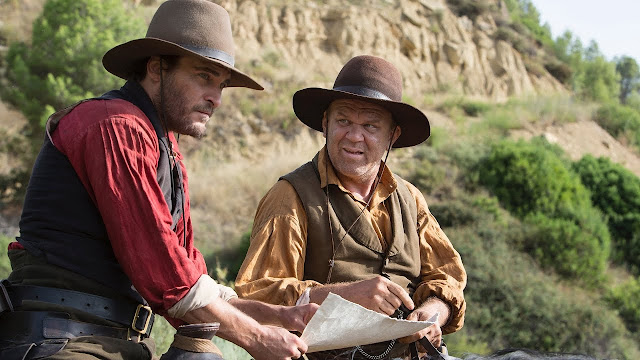 The Sisters Brothers is a Western film directed by Jacques Audiard and based on a book of the same name by Patrick deWitt. It stars John C. Reilly (who also produced) and Joaquin Phoenix as Eli and Charlie Sisters, notorious assassin brothers whose latest target is the idealistic gold prospector Hermann Kermit Warm. It was released last year in America where it proved a box office bomb, losing 28 million dollars. It seems to have only just been released in the United Kingdom as I was able to see it on Wednesday at the Arts Picturehouse in my hometown. Many films starring John C. Reilly (one of those proficient actors who nevertheless picks work in dumb blockbusters for money), such as last year's Holmes & Watson, deserve to bomb, but this was not one of them. The screening I went to was almost empty; I find it sad that such an enjoyable, clever film has flopped so badly. However, it's not for everyone, and I think it was advertised inaccurately, as a guns-blazing Tarantino-esque shoot-'em-up or a comedy. It's neither of these; rather, it's a gentle, slow-moving, character-driven story.

The film gets off to a slow start; it wasn't until the antiheroic protagonists get to Mayfield, when they are warned by a sympathetic prostitute that Ms Mayfield, the town's Madam, crime boss, and namesake, plans to have them killed, that I really got invested in the plot. I love those old Western conventions - of kindly prostitutes, secret traps and betrayals! There are plenty of Western conventions in this film, some of which are celebrated and others which are cleverly subverted; as I'll come to later. Ms Mayfield, incidentally, is played by Rebecca Root, a post-transition transgender person (born a man). This, unfortunately, is difficult not to notice; a politically correct anachronism.

The relationship between Eli and Charlie is endearing in an almost Of Mice and Men sort of way. Charlie is a reckless, violent alcoholic, but Eli, the ideal older brother, will forgive him and go out of his way to protect him no matter what. It's revealed that Eli feels responsible for the way his sibling has turned out, and only joined the gunslinging business to keep him safe. He's a straight-laced fellow who through these unfortunate circumstances has inadvertently ended up one of the most renowned killers in the West, though he'd rather just settle down and own a shop. That's a hilarious and brilliant concept. He's so nonchalant about his career, but he's so damn good at it. His facial expression barely changes as he cuts down man after man, and when he does finally take damage (a minor wound on his shoulder), he brushes it off confusedly as if it's the first time it's happened in his life.

Generally speaking, however, the gun fights in this film are few and far between. And that's fine. It's one of the ways in which The Sisters Brothers subverts conventions. A large chunk of the film, for example, follows the brothers as they (spoilers for the rest of this article) join up with Hermann Kermit Warm (played by Riz Ahmed) and John Morris (Jake Gyllenhall) to prospect for gold and generally just chill out in a beautiful riverside location in the wilderness. The film is highly immersive - it takes its time to show the Sisters brothers slowly, subtly befriend Warm & Morris and get used to and enjoy a life without violence. This calm period comes to an end abruptly, and unsettlingly realistically, when Charlie accidentally spills Warm's toxic prospecting fluid into the river, killing Warm and Morris and severely injuring himself. Warm and Morris' deathbed scenes are very touching. The relationship between these two was also an endearing one, but when Warm is passing away and asking for Morris, Eli kindly poses as the latter as he is too injured to move. After talking with Eli who he thinks is Morris, Warm quietly passes; meanwhile Charlie hands Morris his gun so he can finish himself. As I said, there's much realism to these scenes, which renders them all the more poignant. Somehow Warm's fate was always inevitable - it's another genre convention that idealistic dreams such as those Warm beheld are doomed to failure in the Wild West.

The Sisters Brothers is similarly immersive in its shootouts when it does choose to have them. There's an excellent scene from Charlie's perspective as he's lying on a table, arm decapitated, while his brother goes outside the hospital to deal alone with assassins sent to kill them. The sound design here is perfect - the shots that burst through the hospital window and over Charlie's fearful body sound like aeroplanes exploding; and you really get the feeling that this is what it would be like to be lying prostrate and helpless as an Old West shootout erupts around you. In the next scene - a kind of montage showing reinforced assassins pursuing the brothers in shootout after shootout across the country, has this wonderful shot of Eli and Charlie charging horseback through this jawdropping dusky desert landscape, firing shots behind them at their oncoming enemies.

I wouldn't describe this film as a comedy, as many have. The humour is subtle and rare, but enjoyable. For example, it takes great pleasure in introducing to the main characters inventions which we in the modern day take for granted - such as the toothbrush (which Eli uses with pride, and as if he's never used it before) and the flushable toilet (which the brothers discover in a fancy hotel). I'm no historian but the film indeed does seem to enjoy depicting historical accuracy - not only the more light-hearted examples of oral hygeine and modern plumbing, but also the grizzly scene in which Charlie's arm is hacked off by a doctor (while Eli vomits repeatedly), and the scene in which the brothers discover a beach with all sorts of Victorian household items washed ashore (evidently signs of some sort of shipwreck). It's a lovely bit of worldbuilding.

The film is at its best when it subverts conventions while leading you to expect them. Towards the end when the shootouts start to build up and Eli and Charlie head to Oregon City to kill "the Commodore" (the antagonist of the piece; a criminal mastermind up until this point never seen on screen, but constantly mentioned as a mysterious and highly dangerous malevolent figure), we are naturally led to expect that great Western cliché; the final duel, in which the protagonists usually die tragically. The Sisters Brothers instead goes in a completely different direction. Eli and Charlie arrive at the Commodore's house in Oregon City, only to discover that the Commodore has since died of natural causes. As Charlie's shooting arm has been cut off there's no longer any reason for them to be in the gunslinging business, so they return to their childhood home and have a lovely weekend with their mummy. The Sisters Brothers leads you to believe that there's going to be the most melodramatic and glorious of finales, and then proceeds to give you the quaintest ending imaginable. I love it. Not even Eli can believe his luck, as he brilliantly punches the lifeless corpse of the Commodore "just to make sure". Personally, I expected the film to be one of that slew of gritty, violent, bleak modern Westerns. I loved The Sisters Brothers because it was the opposite of that. The violence isn't over-the-top, nor is it censored - it's simply realistic. The film contains tragedy (the deaths of Warm & Morris), but ends on a warm fuzzy note. And, while the film is perfectly adept at gunfights, it freely opts instead to focus on slow-moving, pleasant character sequences. It's for these reasons that I describe it as a "gentle" Western. I've had enough of all the unnecessary "there for the sake of it" bleakness we see in movies these days; this was a welcome and refreshing change.

The ending is subtle as well as quaint. We know that Charlie and Eli will no longer be gunslingers because Charlie has lost his shooting arm. We know from this that they're finally safe from that dangerous lifestyle. Therefore we don't need to see what they do with the rest of their lives - a lesser director could have easily tacked on a scene at the end in which Eli and Charlie open that shop Eli talked about at the beginning; but it would have been totally unnecessary. We just see Eli and Charlie have a lovely time staying at their mum's house - symbolic of a reversion to childlike innocence (especially relevant to Charlie) - and we know everything's going to be all right. It can be left to our imaginations what they get up to next.

Finally, I'd like to mention the superb soundtrack by Alexandre Desplat. It's absolutely enthralling - at every moment there is some kind of interesting musical hook that draws you in. It's definitely one of the best film scores I've heard, and in hindsight should have been worthy of an Oscar 2018.

It's such a shame this film flopped. Again, I think it was due to advertising, and perhaps they spent a little too much money on what feels more like a subtle, yet quirky indie film than a big-budget Tarantino shoot 'em up or a bleak Christian Bale miseryfest. No doubt, as often happens with such films, appreciation for it will only increase as the years go by, and hopefully someday it'll be considered a unique classic of the genre.
Labels: Film