After Life: a noble mess 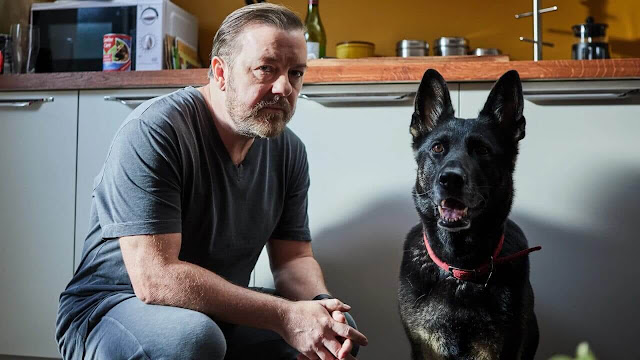 After Life, a new Netflix programme created, executive produced, directed by and starring Ricky Gervais, is, like the Star Wars prequels, a fascinating example of the ups and downs of giving an experienced creator a complete artistic freedom they perhaps no longer deserve.

The folks at Netflix know that, despite a decade of underwhelming productions (Life's Too Short, Derek, David Brent: Life on the Road, etc.), Gervais still brings in the viewing figures through name recognition. Subsequently, they can allow their quality control to be a bit laxer with After Life; so long as it has Gervais' French-Canadian name plastered over it, it's fine by them.

But it's not fine with the viewer, who perhaps hasn't really seen anything by Gervais since An Idiot Abroad, Extras or even The Office. Maybe they were thinking, "ah, Ricky Gervais - he's that genius comedian. His new show must be a masterpiece", blissfully unaware of the years of shoddy screenwriting since. And perhaps, having paid their Netflix subscription fee, they might see it as a betrayal of trust, that something proudly advertised by Netflix with the great Ricky Gervais' signature on should turn out to be so flawed.

I really wanted After Life to be brilliant. After watching the trailer I felt I could identify with the sadly cynical main character Tony (played by Gervais), and I really wanted his story to be portrayed well. This is what I hoped for. What I actually expected, however, was another Gervais sop-fest. As I wrote in a previous article, I have found the man's recent output to "have a cheap, amateurish feel (strange, after Gervais has enjoyed so many years of success)", "pumped full of soppy, clumsy, on-the-nose forced drama". And After Life, predictably, was no different. 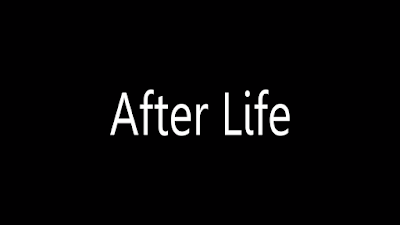 The amateurishness can be found in everything from the main title (above; written in an ordinary sans serif font which looks kind of "stretched", as if it were made on Windows Movie Maker) to the sweary vulgar dialogue. It should be said from the beginning that After Life utterly fails at its primary objective of being a comedy. Rarely it has some funny moments, but the vast majority of the so-called humour is what might be called "the worst of Ricky Gervais" - that is, foul-mouthed insults. The F-word, or the C-word for that matter, does not make a sentence funny for anyone with a semi-decent IQ. But apart from that, the dialogue isn't terribly realistic or nuanced either. When I hear the nice old lady Anne (played by Dame Penelope Wilton), describe religion as a "load of rubbish" and say "might as well top yourself", I'm not hearing her, but Ricky Gervais speaking (or rather, moralising) through her. In the previous episode, Kath (effectively a caricature, played by Diane Morgan, of all the "idiots" Gervais has a bone to pick with, from Kevin Hart fans to religious believers) has an unbelievably poorly written exchange with Gervais' character Tony, which runs as follows. I've highlighted the worst lines.

Kath: I've got a good feature for you.
Tony: No you haven't.
Kath: Rude. You haven't even heard it yet.
Tony: No need.
Kath: Crystals.
Tony: Told you.
Kath: They're healing power.
Tony: (chuckles) They're bullshit.
Kath: You're so narrow-minded.
Tony: No.
Kath: You don't believe in anything.
Tony: Yes I do.
Kath: Thought you were atheist.
Tony: Yeah, doesn't mean I don't believe in anything, does it? It means I don't believe in any god.
Kath: How can you not believe in God?
Tony: Which one?
Kath: What do you mean?
Tony: Well, Zeus?
Kath: Who?
Tony: Greek god. Or Ra, or Ginesh?
Kath: No, not those ones; the real one in the Bible.
Tony: Yahweh?
Kath: Just "God"!
Tony: Well, you know how you don't believe in all those other gods I mentioned? That's how I don't believe in yours.
Kath: How can you not believe that someone created all this though?*
Tony: Why do you believe that someone created it all?
Kath: Because it's so good. Can't just be chance, can it?
Tony nods sarcastically.
Kath: (sarcasm) What, the Big Bang? Everything came from nothing? That's impossible.
Tony: (sarcasm) You're right; God did it.
Kath: Right.
Tony: So... where did God come from?
Kath: He's always been around.
Tony: There you go. Easy, innit?

*This is the worst line, not just in terms of content; but in the very way it's written. It's just so clunky.

Basically, no religious person in England speaks like this. Especially not since New Atheism. Atheists and agnostics are a majority in England; religious people here are abundantly aware that many people do not believe in God. Most also have at least a basic knowledge of Classical mythology and other faiths (both of which we're taught in school). Very few English Christians are Creationists, and even fewer would dispute the Big Bang (a concept invented by the Catholic priest Georges Lemaître). I realise Kath is supposed to be a stupid character, but the fact that Gervais would make her say such things just reeks of angry intellectual snobbery. As with Anne (mentioned above), in these weird moralising vignettes I'm not hearing the characters themselves speak and take on a life of their own (as any good fictional character should do); rather, I'm hearing the screenwriter very blatantly and clumsily speak through them. Again, there's no subtlety in After Life. Everything is on-the-nose. 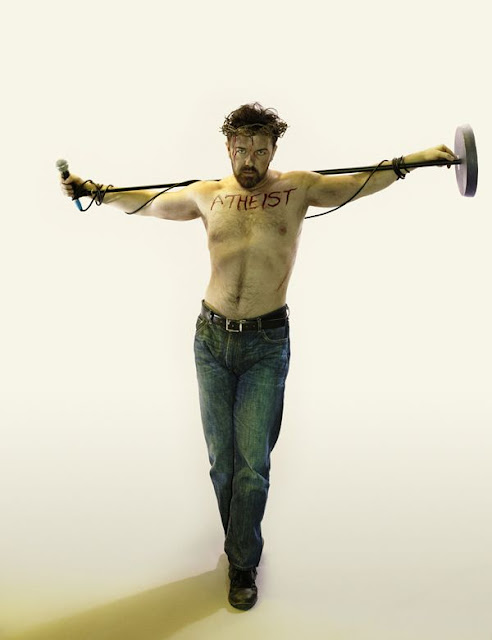 Speaking of unsubtle dialogue, here's another example. It's difficult to grasp just how unsubtle it is unless you watch the scene in question, but I'll type the lines here in case you can't be bothered to have a look yourself (totally understandable). Again, the more problematic lines are in bold.

*He's just asking for it by this point. Far too obvious and unrealistic.

"Choked on a tampon". "His face fell like my nan". "Umbrellas are weird". I get it, it's a parody of a bad comedian. But it's too blatant; too clichéd. I've seen this scene done better a million times before. Anne, Kath and the comedian are too ridiculous to actually exist. They would be fine in a more bombastic comedy like The IT Crowd - comedy's first goal is to make you laugh, not to depict realism. However, After Life, as with Gervais' previous shows, seems to want to be gritty and realistic, and the contrast between this realism and these caricatures of various things Gervais likes or dislikes is jarring. With After Life I was constantly aware that I was "watching a television programme made by Ricky Gervais". There was no suspension of disbelief. Like on a plasticine model made by a child, the clumsy fingerprints of the creator were everywhere.

The series arc is predictable - so much so I barely feel the need to type "skip this paragraph if you don't want spoilers". It goes as follows: Tony is suicidal and cynical after his wife dies. Then he meets someone else and learns to be happy again. Of course. However, there are some interesting unexpected moments in the plot, notably when Tony quite shockingly commits manslaughter in episode four. It's just a shame the moral ramifications of this crime are never really explored. Perhaps they will be in series two. We can only hope.

Mandeep Dhillon, who played the secretary Kaz Parashar in David Brent: Life on the Road, has a very similar role in After Life. That is, she sits around, says scarcely anything at all, and for some reason cries over Gervais' character after barely speaking a word to him for the entire plot. I can't find any clips for this as nobody is very much interested in uploading footage from Life on the Road to YouTube, but trust me, Dhillon does the exact same thing in that movie. I was one of the only people who went to see it.

After reading all this you're probably thinking that I detest Gervais' latest project. Actually, that's not quite true. It's certainly not well-made, and that's what I'm trying to call him out on. The man's been on the television and in films for nigh on twenty years now; we should be holding him to a much higher standard than this. But what's great about After Life isn't Gervais' shoddy writing - it's the subject matter Gervais was writing about. Terminal illness, grief, suicide, self-medicative drugtaking, the burden of consciousness, prostitution, morality, selfishness vs. selflessness, existentialism, life & death... these are some of the fascinating topics that After Life explores. And that's wonderful. With this kind of subject matter, After Life for all its flaws is full of little tidbits of wisdom and food-for-thought. It's great that a mainstream comedy show is giving representation to issues which all of us encounter yet are so often sidelined in our creative media.

Tony: There's only one thing that will make me better, and happy, and that's Lisa being around - and that can't happen. So, that's why I nearly killed myself straight away.
Matt: Ah, right, okay, but you didn't kill yourself, did you? So clearly, you know, something made you stop.
Tony: The look on the dog's face. She was hungry. So I thought, I better feed her. And it gave me time to think: I should be dead now. I didn't care. So everything's a bonus. If I become an arsehole, and I do and say what the f*ck I want, for as long as I want, and when it all gets too much, I can always kill myself. It's like a superpower.
Matt: That's the worst superhero I've ever heard of.

The above is my favourite exchange in After Life, from episode one. I empathise with Tony a lot, and to me this seems like such an accurate depiction of life after loss that I wonder how much of this programme is based on personal experience for Gervais. He's commented before that he always writes about what he knows. Not all of the dialogue in this show is so terrible - a lot of it is genuinely wise and contextually accurate.

As I said at the beginning, After Life is a fascinating example of the ups and downs of giving an experienced creator a complete artistic freedom they perhaps no longer deserve. It has downs a plenty. But the same freedom which allowed Gervais to make serious mistakes has also allowed him to bravely explore important subject matter that might not otherwise have been considered by Netflix.
Overall, I prefer this anarchic freedom. I generally find media more interesting when it's produced by someone with near limitless creative control. It's more auteurist; more real that way. Almost more artistic in the true sense of the word. And I really appreciate After Life for what Ricky Gervais was trying to achieve, even if he didn't always hit the mark. It's a bit of a mess for sure; but a noble one.
Labels: Television