Do I expect too much of South Park? 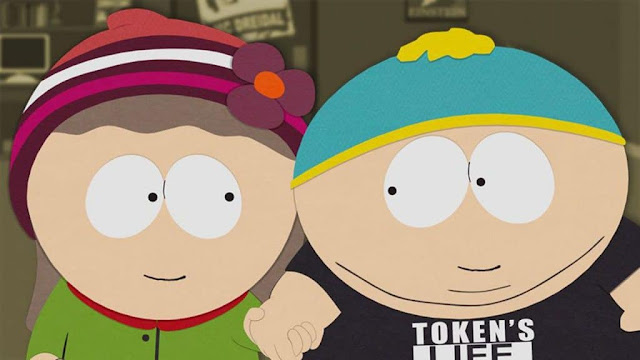 Do I expect too much of South Park? Recently I've been catching up with a few series (or "seasons" as the Americans call them) I missed. Namely, season 20 and season 21.

When serialised story arcs were introduced to South Park for season 18, I was initially unimpressed with the format, thinking it detracted from the comedy of the show. This impression remained with me for season 19, but season 20 I felt was one of the best South Park series I've ever seen. The season story arc was brilliantly entertaining, hilarious, and emotionally enthralling. The transformation of Eric Cartman from an egotistical bigot to an ultra-politically correct, genuinely nice guy, begun at the end of season 19, was a genuinely fascinating and bold piece of character development, as was his romance with the new character Heidi.

The last episode of the season, notably named "The End of Serialization as We Know It", left many plot threads hanging, but the main storyline surrounding the TrollTrace programme was resolved, and I assumed the other threads would be continued and resolved in later seasons. I was left tantalised - what would happen to Heidi and Cartman's relationship? What was the elderly memberberry's plan? Would Gerald Broflovski ever realise his own wrongdoing, and would Sheila ever find out? I eagerly ordered season 21 on Amazon Prime, and when it arrived the next day, watched the first episode in gleeful anticipation.

I was sorely disappointed. I should have taken a hint from the previous episode's title. For season 21 the creators of the show completely abandoned serialisation, and all the aforementioned plot threads are indeed left hanging. I suppose whether or not they serialise is their creative decision, and South Park can still be a decent show without it (season 21 has many good standalone stories for sure). But they could at least have had the common decency of finishing what they started over the previous two seasons, in a non-clumsy, non-lazy way.

I for one - initially sceptical - had become invested in Cartman's personality change, and, laugh if you will, further invested in his relationship with Heidi. All the more so because I knew that neither of these things would last forever - they were doomed for tragedy, and I was keenly interested in how this would come about. For season 21 I anticipated that "moment of revelation", when Cartman realises who he truly is and returns to his old, dark ways. It would have been exciting, after two to three years without him, to give the return of "old Cartman" some hype.

Instead, by the time season 21 begins we see Cartman has already become his old self again. This happened off-screen and is therefore thoroughly underwhelming. True, in "The End of Serialization as We Know It" Butters persuades Cartman that Heidi will inevitably break up with him, and this visibly seems to make him lose faith in his relationship, in womankind, and in political correctness. But it was nothing like a proper character transformation, and I didn't interpret it as such at the time. I assumed it was merely the beginning of a long downward spiral for the character, slowly but surely over the course of the next season back into his old ways. But I was deprived of that journey, merely being permitted to see the meagre vague beginnings of it. Again, thoroughly underwhelming.

Likewise, by the time season 21 begins Cartman's relationship with Heidi is depicted to have already declined off-screen, and we are just left with the results of this without being shown any of the causes. I was invested in their relationship! Thanks to the immediacy of Amazon Prime delivery I didn't have a year to forget or lose attachment to this romance. To literally see them a happy couple one day and an unhappy couple the next was incredibly jarring and emotionally disappointing. "Oh, so much for that investment then" I subconsciously sighed as I watched Cartman treat his previously adoring Heidi like dirt in the first episode of season 21, having been loving the girl (if, towards the end, being a little suspicious of her) only one episode prior.

Little mention is made of the memberberries or their schemes in season 21, nor Gerald's trolling. To me all this just seemed like a lazy tying of loose ends. I understand Trey Parker and Matt Stone wanted to get rid of serialisation for season 21; fine; but that's no excuse to get lazy. It seems like a bit of a betrayal of the creator-viewer relationship, and it has made me lose some respect for a show I have much adored for many years.
Labels: Television