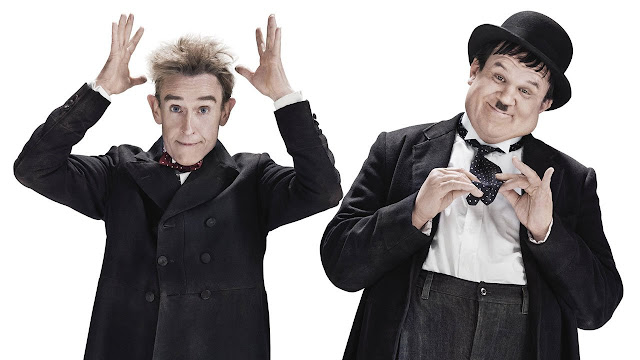 Yesterday I had the privilege of attending an early screening of the new Laurel & Hardy biopic Stan & Ollie (directed by Jon S. Baird, starring Steve Coogan and John C. Reilly) prior to its mainstream release on 28th December in the US and 11th January in the UK. As a lifelong Laurel & Hardy fan I simply had to go.

It should be noted that this particular screening was preceded by The Music Box, the duo's infamous comedy short from 1932 (which I remember watching on ITV when I was growing up. Black and white films used to be broadcast frequently on British daytime TV - not so much these days). It was a lovely touch to see the real Laurel & Hardy's comedic genius before the film began. The Music Box was Laurel & Hardy in their glory days, at the height of their careers; fitting, therefore, as Stan & Ollie chronicles their decline. This was an interesting choice - when making a biopic about great men, many storytellers would choose to chronicle the chosen subjects at their peak rather than at their end. But this gives Stan & Ollie a sad and melancholy tone. The film mostly takes place in 1950s England, in which Stan Laurel and Oliver Hardy are embarking on a tour to try and save their (by now) lacklustre careers.

Of course it's a buddy film (a genre Laurel & Hardy practically originated), exploring the two comedians' lifelong friendship, their loyalty to one another, and their jealousy and envy. Stan & Ollie has its fair share of heartwarming and touching moments, cleverly yet subtly executed. John C. Reilly plays a perfect Oliver Hardy. Steven Coogan does a very good job as Stan Laurel as well; however, I do feel he was at an inevitable disadvantage. Stan Laurel was known for his silly cartoonish facial expressions. Somehow they just don't look right on Steve Coogan. Perhaps because I'm only used to them appearing on the real Stan Laurel's face. Perhaps because there's only one Stan Laurel and only his funny little face could pull them off. Perhaps because in the 1910s, 1920s, and 1930s film was at a much lower resolution than it is now and actors, including Mr Laurel, would often wear make-up - meanwhile, on Steve Coogan's face the same expressions Mr Laurel once pulled are being shown at high definition, and somehow maybe this makes them look a bit too silly. Or perhaps it's simply because Steve Coogan is so well-known as an actor, I'm constantly aware that I'm watching "Steve Coogan doing an impression of Stan Laurel" rather than "Stan Laurel himself".

Special mention should also be made to Ida, Stan Laurel's wife, here played by Nina Arianda as a strong-willed Russian woman (perhaps my favourite character in the entire film - a brilliant performance and very funny), and also to Bernard Delfont, played exquisitely by Rufus Jones as a slimy manipulative impresario practically oozing greed.

My major criticism of the film, however, is its soundtrack, by Rolfe Kent. It's terribly kitsch, like something from a Disney film about CGI animals. It tries so hard to drive home the heartwarming elements of the film (of which there are many), for me at least it had the reverse effect. It tried too hard and cheapened the picture as a whole. The best music in the film is the archive stuff performed, or danced to, by Laurel & Hardy themselves (Coogan and Reilly, by the way, are fine singers).

If you're expecting some great storytelling masterpiece you will also be disappointed. It follows a pretty standard hero's journey structure. There seems to be a real lack of mainstream biopics that want to do something experimental story-wise. Most mainstream biopics seem to be the exact same story told again and again, but about different people.

Nevertheless, Stan & Ollie remains an enjoyable film. It's a touching narrative of two old legends in their final years, trying one last shot at success, and any Laurel & Hardy fan (or not) will get great satisfaction from it.


Footnote: A minuscule nitpick. One historical inaccuracy I spotted was the Canadian Maple Leaf Flag being flown from the Savoy Hotel (next to the British Union Flag and whatnot), which wouldn't be adopted as the national flag of Canada until 15th February 1965, almost eight years after Oliver Hardy's death and only eight days before Laurel's. As for any other historical inaccuracies in the film; unlike with Bohemian Rhapsody (2018), I do not have the knowledge of this part of Laurel & Hardy's career to comment on whether this film was accurate or not. For all I know it could be as inaccurate as Bo Rhap - and just because it took place further in the mists of the past doesn't mean it should get away with it. I'll look into this matter and update this article if I find any inconsistencies.
Labels: Film