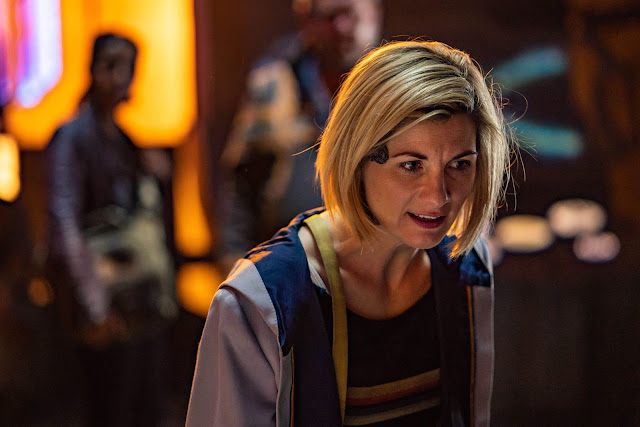 Last Sunday the latest series (series 11) of Doctor Who reached its finale with "The Battle of Ranskoor Av Kolos", written by the new Doctor Who showrunner Chris Chibnall. I found this episode quite bland. Its plot can be summarised thus: Mr Mwuhaha sci-fi villain, motivated by revenge, builds a weapon of mass destruction and uses it to try and destroy - dun dun dun - Earth! Can the Doctor save the Earth before time (yes, the ticking bomb is a classic Chris Chibnall plot device) runs out?!!!

As you can see, it's incredibly cliché, and we've seen it a million times before. Quite literally, in fact, as another of Chris Chibnall's hallmarks, as well as the ticking bomb, is his penchant for stealing ideas from better Doctor Who scripts* - in this case the 2008 two-parter "The Stolen Earth"/"Journey's End", cheekily referenced within "The Battle of Ranskoor Av Kolos" itself (as if that makes it okay). In both "Ranskoor Av Kolos" and "Stolen Earth"/"Journey's End" an antagonist creates a weapon of mass destruction out of planets (including Earth) and in both stories the Doctor drags the planets back to their correct places in time and space using the TARDIS.

It wasn't up to scratch with previous series finales - in fact it could barely be called a series finale at all. The previous episode "It Takes You Away" concluded Ryan and Graham's character arc (which had been the story arc of the entire series). "Ranskoor Av Kolos" could have been placed one or two episodes before "It Takes You Away" and it wouldn't have made a difference. Ah well, this isn't necessarily a bad thing, I guess - after all, the classic era of Doctor Who didn't really have series finales or series arcs. But I am personally fond of them and they have historically served the revived era well - ("The Parting of the Ways", "Army of Ghosts"/"Doomsday", the Master trilogy, "Stolen Earth"/"Journey's End", etc., etc. Mostly excellent, though exception must be made for "Dark Water"/"Death in Heaven").

What did I think of series 11 as a whole, you ask? Well, unfortunately "Ranskoor Av Kolos" has left me with a bad taste in my mouth. I think on the whole I actually preferred the last showrunner Steven Moffat's last series (series 10). Steven Moffat had his own problems, such as too much fan service and an over-reliance on the show's lore and history. Chibnall has abolished these particular problems (to his credit Chibnall really has made Doctor Who feel like a fresh new show), but unfortunately new ones have presented themselves. Everyone was thoroughly sickened by Moffat by the end of his tenure as showrunner, and we all hoped the change of showrunner (and Doctor) would kick some life into the dying programme. So I'm kind of disappointed that on reflection I find I actually preferred Moffat's last series more (though not surprised - I had warned everyone not too get too optimistic about Chibnall. I have seen Broadchurch series 2, after all...).

In Moffat's series 10, "The Pilot" was good but not amazing, "Smile" was good, "Thin Ice" was dull (people seem to support this episode just because it included the Doctor punching a racist), "Knock Knock" was all right, "Oxygen" was good, "Extremis" and "The Pyramid at the End of the World" were both good, and I enjoyed "The Lie of the Land" even though it was very much flawed; "Empress of Mars" was good but not great, "The Eaters of Light" was cheap and nasty, "World Enough and Time" is one of my favourite Doctor Who episodes of all time, "The Doctor Falls" packed a punch, and if we are to count the Christmas special "Twice Upon a Time", that was rushed and objectively bad.

Meanwhile, in Chibnall's series 11, "The Woman Who Fell to Earth" was bland, "The Ghost Monument" was good but not amazing, "Rosa" was really good if not exactly subtle, I enjoyed "Arachnids in the UK" but it too wasn't amazing, "The Tsuranga Conundrum" I found terribly bland (with a cameo from a minor British celebrity like all forgettable "cheap and nasty" episodes of Doctor Who), "Demons of the Punjab" was really good (though it's a shame about the budget), "Kerblam!" was good but not amazing, "The Witchfinders" started off brilliantly but sabotaged itself with a truly laughable ending, "It Takes You Away" was good though overrated, and finally, as I've just mentioned, "Ranskoor Av Kolos", while it wasn't the worst episode of Doctor Who, I just found bland and a waste of my time.

Of course, these are just my opinions - little three-word reviews of each episode of both series. But it proves that, yes indeed, I preferred Moffat's last series to Chibnall's first one. Do I regret that Moffat left? No. He had to go - the unexpectedly good quality of his last series was a bit of a shock to everyone, one might say a flook. Series 8 and 9 had proved he had run out of ideas and passion for the show, but at least he tried hard to make series 10 an honourable exit by scraping together what little of these things he had left and diluting them to make something of generally decent quality.

No, I don't miss Steven Moffat (I do miss Russell T Davies, but that's a matter for another article). No, the question I should be asking is do I regret that Chris Chibnall was the one who was chosen to replace him? It's impossible to say who would have taken over if Chibnall had not been selected, and subsequently if their work would have been any better. But surely there must be somebody out there who can do a better job? Charlie Brooker, perhaps? I have said before that Doctor Who is at its best when it is a "Black Mirror for children".

Series 11 wasn't the worst thing in the world. As I mentioned earlier, it avoided the fan service and over-reliance on Doctor Who lore present in the Moffat era, it kept things simple to attract new viewers, the special effects were good quality, I enjoyed the educational historical episodes and the TARDIS team dynamic (both of which led me to make comparisons between this series and the original William Hartnell era of the show), the new composer Segun Akinola is spreading his wings and it should be interesting to watch him flower as a composer as Murray Gold did before him, and of course special credit must go to everyone's favourite character, Bradley Walsh as Graham O'Brien. I just feel "underwhelmed". I can't help compare it to the other series I've watched in my lifetime which introduced new production eras of Doctor Who - namely, series 1 (2005), which introduced the Russell T Davies production era, and series 5 (2010), which introduced the Steven Moffat production era. These two series were impeccable and prophetic of the televisual gold which was to follow in the Davies and Moffat eras (for the Moffat era was brilliant originally). Series 11, introducing the Chibnall production era, is paltry in comparison, and what does that say for what will come later?


*For evidence of both these hallmarks watch NitPix's recommendable video analysis on the man, which was notably made before he became showrunner.

House of Cards, which like Doctor Who has also recently been taken over by a blonde female lead (for its final series), never ceased to amaze me. The first three series, which chronicle Frank Underwood's rise to power, were good, and worthy of the British original. However, since then I found the series extremely dull and evermore ridiculous. Now we have seen Frank appoint his wife Claire as his Vice-President, Claire in her time being elected President through a constitutionally questionable and highly unlikely route, a secret Ku Klux Klan-style political conspiracy doing fire rituals in a forest, Frank pushing the Secretary of State down the stairs, President Claire Underwood reverting to her maiden name of Hale while in office (surely a wildly scandalous move considering all the rumours of divorce?), President Claire appointing an all-female Cabinet in an act of extremely heavy-handed political correctness bordering on misandry, and finally President Claire being revealed as pregnant in series six despite one of the first arcs of the programme back in series one being that she was going through the menopause. How was her pregnancy biologically possible?! I waited years for this show to finish petering out, and only continued to watch it out of a loyalty to the characters. I want those many hours of my life back.

I find myself strangely nostalgic for the internet of the 00's. Remember 9GAG-style memes? "YouTube poop" based on The Lord of the Rings, South Park and Harry Potter? The Llama Song? As a boy I made my first website, called Da Cat's Eye, in 2009/2010, as did many of my friends. We also all had our own YouTube channels, onto which we uploaded childish videos and animations. Back then a search in Google Images would return weird low-res JPEGs, the origins of which remain a mystery (if you want examples of these, they are peppered throughout the Mr Plinkett review of The Phantom Menace, itself a staple of 00's internet culture). Who took all those photographs? This sketch by South Park also sums up the internet of the time pretty well too (this particular version was recorded in the 00's and is very 00's-ish itself, with very low resolution and basic Windows Movie Maker effects). The world wide web was new to us all, and far less professional than it is now.
Labels: Doctor Who Recent Ponderings Television