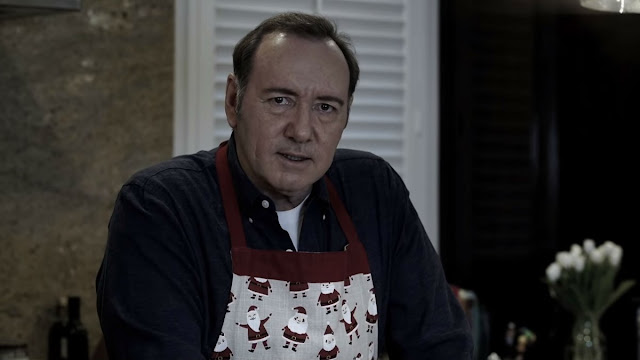 One of the most bizarre celebrity videos I've ever seen (and that's saying something), is Kevin Spacey's creepy three-minute YouTube upload, released a year after his career crashed and burned amid sexual misconduct allegations, in character as the murderous politician Frank Underwood, appearing to deny a recent charge of indecent assault and battery while cooking Christmas dinner in a festive apron. I simply didn't think we would see any more of him; I thought he would fade into a shameful obscurity. But I should have known better; Spacey is far more interesting than that. Here is the full text of his strange little speech, entitled "Let Me Be Frank":

I know what you want. Oh sure they may have tried to separate us, but what we have is too strong, too powerful. I mean after all, we shared everything, you and I. I told you my deepest darkest secrets. I showed you exactly what people are capable of. I shocked you with my honesty. But mostly I challenged you and made you think... and you trusted me... even though you know you shouldn't.

So we're not done, no matter what anyone says. And besides, I know what you want. You want me back. Of course, some believed everything and have just been waiting with bated breath to hear me confess it all; they're just dying to have me declare that everything said is true and that I got what I deserved. Wouldn't it be easy, if it was all so simple? Only you and I know it's never that simple, not in politics and not in life... But you wouldn't believe the worst without evidence, would you? You wouldn't rush to judgements without facts - would you? Did you?

No, not you - you're smarter than that. Anyway, all this presumption made for such an unsatisfying ending, and to think it could have been such a memorable send-off. I mean if you and I've learned nothing else these past years it's that in life and art nothing should be off the table. We weren't afraid, not of what we said, not of what we did, and we're still not afraid... because I can promise you this... if I didn't pay the price for the things we both know I did do, I'm certainly not gonna pay the price for the things I didn't do.

Well of course they're gonna say I'm being disrespectful not playing by the rules; like I ever played by anyone's rules before - I never did, and you loved it. Anyhow, despite all the poppycock, the animosity, the headlines, the impeachment without a trial - despite everything, despite even my own death, I feel surprisingly good, and my confidence grows each day that soon enough you will know the full truth... Wait a minute, now that I think of it... you never actually saw me die, did you? [Places Frank Underwood's ring on his finger] Conclusions can be so deceiving. Miss me?

Then the video ends with an extremely clichéd "dun dun dun!" finale which ruins the atmosphere of the whole thing.

After a year of relative silence, why would Spacey suddenly return now, in such a manner? Well, it seems a combination of the recent series of House of Cards (released without Spacey's involvement), as well as this new charge of assault and battery, is what has shaken him out of the woodwork and into making such a weird Christmas video.

Spacey, to be fair, is right about two things. "All this presumption made for such an unsatisfying ending, and to think it could have been such a memorable send-off". He's right, the final series of House of Cards was awful without him. It would have been awful anyway - House of Cards has been hideously dull since series three ended - but there's no doubt his character Frank Underwood was a gem amidst the rubble, and Robin Wright's character Claire Underwood simply couldn't carry the show without him. After Spacey's downfall mid-series Frank had to be killed off lacklustrely off-screen, and House of Cards just kind of petered out with the far lesser leads of Claire Underwood and Doug Stamper.

The second thing Spacey's right about is this - "You want me back". This is true. The fans he gained with House of Cards have been dedicated and loyal. Not long after his downfall and before series 6 aired, I remember reading multiple comments on the official House of Cards Facebook page pleading for Spacey to return. And, at the time of writing, Spacey's "Let Me Be Frank" has 178,000 YouTube "Likes" compared to a measly 52,000 "Dislikes" (rounded to the nearest thousand). Now, it's true not everyone would have been "liking" this video because they support Spacey - no, many of them would have "liked" it for its pure entertainment value. But the demographic which forgave Spacey pretty much as soon as he was first accused really does exist.

I think I'm starting to understand why Spacey has done this. He's using the enduring power of the villainous Frank Underwood character to justify himself somehow - Frank Underwood was the villain we loved to hate; by embodying him perhaps Spacey is hoping he can become a villain we love to hate too, rather than what he currently is - a villain everybody merely hates, or at worst is indifferent about. Perhaps he's not only justifying his actions to us, but by embodying this character, justifying them to himself. "Mwuhaha, I am Frank Underwood, of course that's why I did all those perverted things! Because I'm the villain everyone loves to hate!". Again, this seems to me a little disrespectful to those whose allegations are true.

Last week I was in a bookshop searching for last-minute Christmas gifts. One of the books I spotted was a biography called Polanski by Christopher Sandford, about the film director of the same name. A review from The Spectator was printed on its front cover: "Expertly put together ... a notable tribute to a rascal genius". A "rascal", as if he were some kind of Dennis the Menace character. Polanski drugged and raped a 13-year old girl!

I have yet to see a Polanski film, but I know the man has somehow managed to maintain a massive cult following as a film director 40 years after he committed his crime, through the sheer quality of his films. Well, I'm sure his films are very good, and I'm sure he's an accomplished filmmaker despite what he did. Just as Spacey is an accomplished actor, who still has many fans who "want him back". Because the truth is talent has nothing to do with morality.

It's a startling realisation. There are serial killers and paedophiles in prison out there who could have been the next Alfred Hitchcock, Albert Einstein, or Amadeus Mozart. Yet their talents generally go to waste due to their necessary ostracisation from society, just as the great actor Spacey is arguably being wasted now by his own exile.

Of course, a few evil men and women inevitably slip through the net of justice and become great talents regardless. Roald Dahl, an anti-Semitic brute who cheated on his brain-damaged wife, who in any other age wouldn't be allowed anywhere near success, made his millions in the 20th century with undoubtedly ingenious books which are still adored by children and adults worldwide. John Lennon, meanwhile, was a champagne socialist millionaire who preached peace and love in public while cheating on his wife Cynthia and neglecting his son Julian at home. Nevertheless, he made some good music. The author and scientist Marie Stopes, no doubt a highly intelligent and successful woman, was also a vain cold-hearted eugenicist who among other things tried to sabotage her son's marriage and eventually cut him out of her life.

Perhaps another example would be H.P. Lovecraft, although unlike the others his talents were only recognised posthumously. Myself and Elliot (my co-host from The Ood, the Bad and the Ugly) have recently been playing the Call of Cthulu RPG, based on Lovecraft's story of the same name. This got us into a discussion a few days ago about the morality of enjoying the works of Lovecraft, a racial bigot, whose bigotry is evident throughout many of his writings (most obviously of all in a 1912 poem entitled "On the Creation of Niggers"). We agreed that his racism was part of what made him and his works morbidly fascinating; that sometimes, quite often actually, to have a twisted mind is valuable in art (especially in the horror genre).

Would we really be better off without Spacey's sublime acting, Dahl's enchanting tales, Lennon's clever tunes, or Lovecraft's dark imagination? I don't think so. Therefore, by this logic, I lament all the talent that is being wasted in prisons and brothels and crack dens the world over. Just because these people are "morally questionable", doesn't mean it's any less of a tragedy that all the art and achievement they create, or could create, will never see the light of day.

It's somewhat inevitable, I suppose. We justly don't want to grant evil people the great honours of fame and fortune, so their labours must be ignored at best and scorned at worst, even if they have value (artistic or other). For instance, I always feel guilty whenever I listen to "Dunkelheit", which I believe is the pinnacle of ambient black metal. It just so happens to have been created by Varg Vikernes, a bigot and a murderer. But perhaps, as with Lovecraft, only a very twisted person could have crafted such a masterpiece.

If only we could more easily separate the art from the artist, but this is difficult to do when art, artist, and the artist's crimes are so often intertwined. Most human beings find it extremely difficult to separate the talent from the talented - while I can appreciate Spacey's dramatic work without supporting Spacey, as the 178,000 people who have "liked" his "Let Me Be Frank" manifesto have proven, most people cannot do this - they cannot help idolising great men, and will defend them to the end. This is the nature of the modern cult of the celebrity - most celebrities, while generally talented, aren't any more moral than the general population. In most cases they're arguably a great deal less ethical. But the masses adore them regardless, not for who they are, but what they can do.

This puts us in a real pickle - the question of whether we should shun talent in favour of justice, or shun justice in favour of talent. It's a genuine conundrum - and it explains why the #MeToo movement has been so controversial. Talent going to waste puts a bad taste in my mouth, but so too do the many cases of celebrities being excused for their many crimes. I ask myself, surely there must be a middle way?* But I'm doubtful when The Spectator describes a child rapist as a little "rascal", 178,000 people "like" Spacey's creepy sexual assault video, and Roald Dahl continues to be surrounded by a haze of childlike affection. Perhaps this is original sin. Perhaps human beings will always be too bedazzled by worldly success to care as much about spiritual failings.


*To avoid misunderstanding, to clarify I'm hoping for a way to appreciate the talents of wicked people without glorifying them with fame and fortune. I'm certainly not arguing against bringing people like Harvey Weinstein to justice.
Labels: Film History Music Politics Television