The spirit of the Russell T Davies era 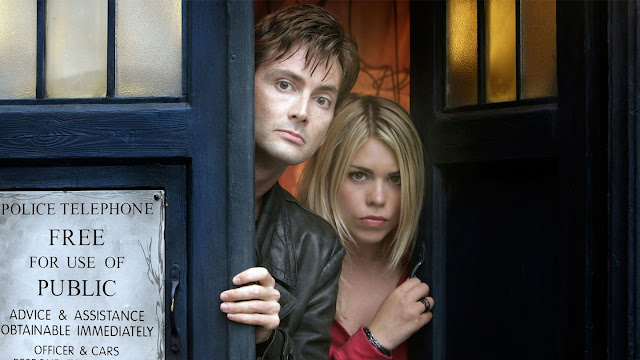 How privileged was I to grow up in the 00's, to experience the Russell T Davies era of Doctor Who in all its glory. I was there from beginning ("Rose", age 7) to end (The End of Time, age 11), and boy did I have fun. It seemed that everybody watched Doctor Who back then - all the adults who had seen the show as children were excited about its revival, and subsequently watched it with their own children (including me).

I don't know what the actual viewing figures say about this but it really felt like there was nobody in the country who wasn't tuning in on Saturday nights. Doctor Who felt like what it is - a British national institution. Go back and watch scenes like when a spaceship crashes into Big Ben in "Aliens of London" or when the Doctor saves Buckingham Palace from being crushed (by a spaceship, again) in "Voyage of the Damned" and you'll get an idea of what I mean. It was almost another national unifying "Blitz spirit" which the programme evoked - except we were united against fictional menacing aliens rather than real life dastardly Germans.

I feel this spirit was even evoked within the diegesis of the show itself - Russell T Davies' Doctor Who takes place within a fictional world in which Great Britain is experiencing a new "Golden Age" under Prime Minister Harriet Jones (with the jingoistic Imperial strength of the Torchwood Institute behind her). In this tongue-in-cheek Anglocentric universe, the next British Prime Minister (Harold Saxon) has the US President shot by aliens (something I'm sure many Britons - light-heartedly, of course - fantasise about in this one-sided "Special Relationship")! But there is also an element of post-Britpop kitchen sink realism to these episodes - for example, in the first two series of the Davies era half the show is dedicated to exploring the personal and family relationships of an ordinary working class British family, the Tylers, in a block of flats. I'm sure growing up with all this had a big influence on the patriotic quintessentially British little boy I turned out to be.

The Christmas specials - "The Christmas Invasion", "The Runaway Bride", "Voyage of the Damned", "The Next Doctor", "The End of Time: Part One" - were where this feeling of national solidarity could be felt most easily, Christmas being a communal festivity after all. Christmas and Doctor Who are now inextricably linked in my mind, as I'm sure they are in the minds of millions of others of my generation. Hence why I'm disappointed to see that, apparently, the annual Doctor Who Christmas special is to be scrapped and replaced with a "New Year's special".*

The spirit of the Russell T era spread beyond Doctor Who as the show paved the way for a resurgence in Saturday night family television - Robin Hood, Primeval and Merlin similarly enthralled the nation, including a young yours truly.** And not to forget the great Who spin-offs of that era - if you weren't watching Doctor Who you were watching The Sarah Jane Adventures, Torchwood, Doctor Who Confidential, Totally Doctor Who, The Infinite Quest, or Dreamland instead. Steven Moffat's attempts at Who spin-offs, The Fan Show and Class, just weren't of the same calibre.

The early Steven Moffat era was great too, although I simply do not have the same nostalgia for it as I do the Russell T Davies period as by the time it started I was already aged 12. The Russell T era - campy and sentimental as it was - was the Doctor Who of my childhood, and therefore will always be surrounded by a golden halo in my eyes. But I don't think my love of Davies' era can just be boiled down to nostalgia. Ask anyone who "the Doctor" is and they'll most likely immediately think of either Tom Baker or David Tennant, all these years later. They are by far the most popular Doctors and their eras are looked back on with a fondness which is not typically reserved for the Colin Baker or Peter Capaldi periods...

The sad thing is, I'm not sure we'll ever get the spirit of Davies' era back. The ratings for the current ongoing series of the show are very good, but in this postmodern era of Netflix and boxset television, in which the viewer is given so much choice (for a large part of my childhood we only had five analogue channels), I can't see Doctor Who having quite as much universal popularity as it used to. I just feel it's less likely today that if I asked a man on the street what he'll be doing on the weekend, he'll say "watching Doctor Who". He might be watching Breaking Bad or Game of Thrones instead.


*As I recently commented on a MrTARDIS video on the matter,
"Christmas specials don't need to have "Christmas" plastered all over them (in fact I felt the Christmas-heavy Moffat specials were extremely twee). And they don't need to always be written by the head writer. I would miss the Christmas specials  - in the last few years they've generally been awful, but growing up in the 00's knowing that Doctor Who would return to the screen, along with presents under the tree, was a part of what made Christmas exciting. Doctor Who and Christmas are kind of linked in my mind as I'm sure they are in the minds of millions of British children.﻿"

**Although as I got older I did get bored of Merlin. It just became one bad-CGI monster after another and endless blue-balling of the reveal of Merlin's secret identity as a wizard and the inevitable depiction of the Arthurian legend we all knew was coming (Merlin being in effect a prequel to the story of King Arthur). I had to quit it eventually.

Footnote: I also think the Russell T Davies era was simply more quintessentially Doctor Who-ish than the Steven Moffat or Chris Chibnall eras. Everything about it - from the design of the TARDIS to the title sequence - was just more grungy, gritty and scary. I do believe that Doctor Who at its best is supposed to be a sci-fi horror for children. The Jon Pertwee and Tom Baker years with their shop window dummies and mutant maggots and Wirrn pulled this off perfectly, but so did Davies in his era. 00's Doctor Who with its shop window dummies (again), gas mask zombies, skin-wearing Slitheen, scarecrow soldiers, and carnivorous shadows, may have inspired my morbid interest in horror in the first place. While Moffat penned some of the greatest horror episodes in DW history (many in the Davies era itself - I would like to clarify that I'm complimenting the era as a whole rather than giving all the credit to Davies as a writer), his tenure as showrunner was generally a bit too twee for me (as I wrote in a previous article, "his tenure as showrunner has seen the programme infantilised as a soppy, self-congratulating, feelgood fairytale in which, as he wrote in "The Doctor Dances", "everybody lives!""). And from the looks of the bright, colourful Chris Chibnall era, which is all about friendship and love and compassion and Ptings, it doesn't seem like we're going to get that sci-fi horror feel back anytime soon. I really think that Doctor Who could be a family-friendly version of Black Mirror (or is Black Mirror an adult version of Doctor Who? Charlie Brooker is a Whovian after all). Maybe if I were ever to become showrunner, I could make this a reality once more (a guy can dream!).
Labels: Doctor Who Television