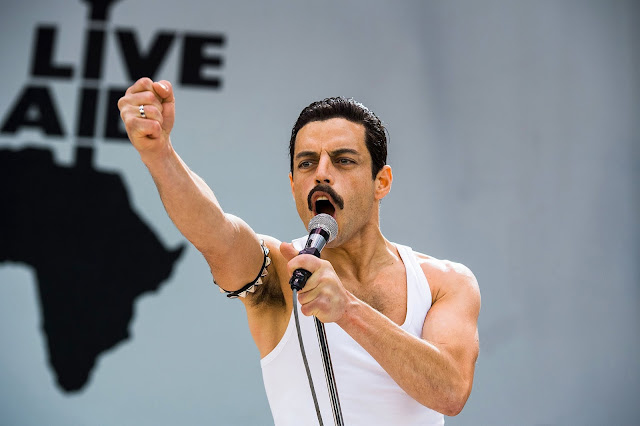 On Saturday night I watched Bohemian Rhapsody, the new biopic about the lead singer of Queen, Freddie Mercury. Full disclosure: I was indoctrinated from a young age by my father into Queen fandom, so this must account for part of the reason why I enjoyed the film as much as I did. I was already a fan of Freddie, and with Rami Malek's perfect performance, he is Freddie Mercury. However, I'm also a great fan of The Smiths, yet last year's England is Mine didn't impress me half as much.

For me, Bohemian Rhapsody packs all the punches - thrilling, funny, and heartbreaking, it is a very effective film. It was beautifully. colourfully directed by Bryan Singer (completed by Dexter Fletcher), and the cast is superb. As well as their performances, the cast I'm sure could get away with being professional Queen lookalikes (with the exception of Ben Hardy, who does an amusing performance as Roger Taylor despite not looking very much like him. Neither does he age at all throughout the fifteen years the film chronicles).

I simply have not had this experience watching a film for a long time. Too often have I gone to the cinema and had a "yeah, that was all right" feeling. Not with Bohemian Rhapsody.

Unfortunately, the film is full of historical inaccuracies, which traumatised my Queen-geek Dad a week ago when he went to see it. I won't bother listing them all here but even the most paltry Queen fan will be able to pick at least some of them up; and who is this film made for but the fans? I can understand why they chose to include these inaccuracies on some occasions - notably striking Freddie down with full-blown AIDS years before he even contracted HIV, in order to give their legendary 1985 Live Aid performance - arguably the pinnacle of Queen's career - an extra emotional, climactic punch. And sure enough, this is effective. The Live Aid scene in itself is the best scene in the film anyway (totally worth the to-scale recreation of the Wembley stage and the 2,000 extras) - after a whole film's worth of studying Freddie's history, to see "him" (as I said before, Rami Malek is Mercury) perform in all His Majesty is just what the audience needed as a finale. Incidentally this is something which England is Mine generally lacked due to not actually having the rights to any of The Smiths' music.

However, I'm not going to make excuses. You don't have to falsify history in order to tell a good story - the story of Freddie Mercury is interesting and dramatic enough as it is; it just demonstrates a lack of imagination or writing skill. Half the importance of a biopic isn't just entertainment; it's to be informative. So it's a real shame the creators of Bohemian Rhapsody went down this route.

Nevertheless, the general thrust or feel of Bo Rhap is accurate - this is pure Freddie Mercury, his very being squeezed into a 134 minute motion picture and distributed to the masses. And for that to any Queen fan (provided he doesn't get too pickety about the inaccuracies) this will be like crack cocaine.

The atmosphere surrounding the film has been wonderful. All the secret Queen fans have come out of the woodwork. During a night out in Freshers' week I was surprised to find so many Queen songs being played - and all my fellow freshers were thoroughly enjoying them, including the entirety of "Bohemian Rhapsody" (the song). I've had conversations about Queen and just yesterday I overheard the girl in the room next to mine in my student accommodation listening to a few songs by the band. It's been wonderful to see Rami Malek being invited onto all the big chat shows to talk about Freddie. I've really appreciated it.

Spoilers ahead. I enjoyed the romance side of the film. I have always found Mercury's doomed, yet lifelong, romance with Mary Austin tragic and fascinating. And the film does contain a morality tale which appeals to me but may not be politically correct in this day and age - Mercury leaves his true love Mary and his "family" Queen to lead a life of debauchery with Paul Prenter (who serves as the heavily demonised representation of this lifestyle), before returning like a Prodigal Son to the band, to Mary, and to the next love of his life, Jim Hutton. So it is really a story of love over lust, which I find endearing but as I said, may not appeal to everyone. How accurate this story was in reality I don't know; I have seen this demonisation of Paul Prenter elsewhere in chronicles of the Queen history; I can certainly see Brian May and Roger Taylor's influence over the film here. I suppose the proof is in the pudding - compare the dreary Hot Space and Mr. Bad Guy, both made under Prenter's influence, with literally any other Queen record.

I also enjoyed the story arc involving Mercury's relationship with his Parsi family - the strained beginnings and the eventual reconciliation. However, I would have liked to see more of the friendship between the bandmembers. Queen never split up and had twenty odd years together - a pretty amazing feat in rock band terms, so the close friendship between the bandmates has always fascinated and endeared me. Don't get me wrong - we have plenty of this in the film (the scene in which tears appear in John Deacon's eyes as Freddie tells the band his AIDS diagnosis was particularly potent, knowing how badly Deacy in particular has reacted to the singer's death), but I would always like more, more, more. I suppose you can't fit everything into a single film.

Finally, the film ends in the most fitting way possible - with footage of the real life Freddie performing (well, lip-syncing - for the "Don't Stop Me Now" music video) over the credits. Naturally the audience in my cinema didn't get up from their seats - as they usually would do when the credits start rolling - until he had finished. And then, after that, on a more sombre note they played "The Show Must Go On". I would have liked to stay to listen to that - it sounded excellent with the cinema sound system - but by this point other audience-members were leaving and I felt myself being bustled out.

Finally, it's time for my conclusion. I would advise don't be too put off by the historical inaccuracies. They were embarrassing and unforgivable to be sure, and a better screenwriter would have avoided them. However, if you go to see this film you will still have a great time, and will get an accurate idea of just who Freddie Mercury was.
Labels: Film Music