The Doctor may be younger than you think


I liked the fact that in the 2015 Doctor Who episode "Hell Bent", the leader of the Sisterhood of Karn, Ohila (played by Clare Higgins), refers to the Doctor as "boy". Clara questions the Doctor about this to no avail - it did indeed surprise her, as the Doctor is over 2000 years old by his own account. However, it did not surprise me. I have long thought that the Doctor is actually still quite young by Time Lord standards. I will explain why.

A Time Lord can usually only have thirteen lives. The Doctor, having been rewarded a new cycle of regenerations by the Time Lords in "The Time of the Doctor", is currently (as of "Twice Upon a Time") on her fourteenth life (played by Jodie Whittaker). However, how many of these lives has she actually used up till old age? Only the First Doctor (who obviously aged in-between his appearances in "Listen" and The Tenth Planet!), the Second Doctor (if we accept the season 6B theory as correct - that the Second Doctor who appeared in The Two Doctors had lived for many years after The War Games), the War Doctor (compare the ending of "The Night of the Doctor" with "The Day of the Doctor"), and the Eleventh Doctor ("The Time of the Doctor") used their bodies into old age. Only four out of fourteen Doctors have used their lives to their natural lifespan! Other Doctors, such as the Fourth (who looks a bit older in Logopolis than he did in Robot), the Seventh (compare Time and the Rani to the Doctor Who movie), the Eighth (who aged a fair amount between the Doctor Who movie and "The Night of the Doctor"), and the Tenth (who I think grew up a bit between "The Christmas Invasion" and The End of Time) aged too, but to far lesser extents - they certainly came nowhere near using up their natural lifespans; they all died "young".

So if we assume that the natural Time Lord lifespan is to grow old thirteen times, considering that the Doctor has only done this a mere four times, I would say that makes her quite a young Time Lord, regardless of the extra lives she has been given.

But why does the Doctor use up her lives so quickly? Well, she has a very dangerous lifestyle. Just think of the causes of her regenerations - only the First and Eleventh Doctors, as well as the War Doctor, died of old age. The Second was forced to regenerate, the Third was poisoned by radiation, the Fourth fell from a radio telescope, the Fifth suffered an illness, the Sixth was injured in a TARDIS crash, the Seventh was shot by a street gang and killed by the resulting surgery, the Eighth also crash landed, the Ninth suffered cellular degeneration by absorbing the time vortex, the Tenth was both shot by a Dalek, and later poisoned by radiation again, and the Twelfth was electrocuted by a Cyberman. What a life! The Master similarly used up all his regenerations quickly (even quicker than the Doctor in fact - while the Doctor was only in his Fourth body, the Master was already in his last natural life (The Deadly Assassin)). This is because the Doctor and the Master are both Time Lords of the Prydonian variety - and Prydonians are known to lead lives of danger and adventure.

So, dear Clara, to answer your enquiry: this is my explanation for why Ohila referred to the Doctor as "boy" in "Hell Bent". I hope I've sorted it out for you.*

*Note: this theory only works if you believe that the Doctor did not truly spend 4.5 billion years in the confession dial in the preceding episode, "Heaven Sent". If he did, as Steven Moffat seems to believe, then he is in fact one of the oldest of the Time Lords. If he did not, then this explanation works. But even if the Doctor is over 4.5 billion years of age, even by the logic of "Heaven Sent" he/she must still have the mental age at least of a young Time Lord. 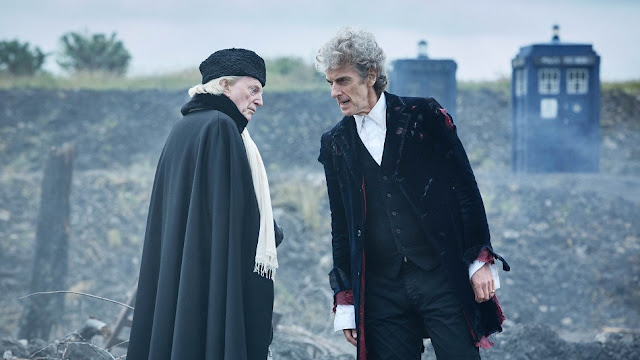 The more that I think about it, the more I am assured that the Twelfth Doctor's various jokes at the expense of the First Doctor in the latest episode of Doctor Who, the Christmas special "Twice Upon a Time", were wrong.

They were very mildly amusing, but did not fit with the Twelfth Doctor's character. This incarnation of the Time Lord always seemed to me to be rude, alien, and socially awkward. So the jokes he made regarding the First Doctor, directed at how old-fashioned the First was, seemed very out of character. Since when was Twelve an expert on human customs and fashion? I always thought of him as quite the opposite.

Let me give a specific example of this: in one scene the First Doctor threatens to give companion Bill Potts (or at least, spoiler alert, a representation of Bill Potts) a "spanked bottom". While this would have been a more likely/acceptable thing for old men in the 1960s (when the First Doctor era aired) to say, such a thing would be ridiculous today. Hence the humour. However, the Twelfth Doctor reacts to this with major embarassment, which I think is quite out-of-character. I would have rather expected him to say something like, "what? What's so wrong with me giving you [Bill] a spanked bottom?", due to his socially inept alien nature.

Twelve also refers to the First Doctor as "Mary Berry", "Corporal Jones", and "Mr. Pastry", and places his sonic sunglasses on him for a laugh. Since when did he become so arrogant and cool? Yes, since his second series he has been wearing sunglasses and rocking on his electric guitar. But I always thought he was cool only in an eccentric fun uncle sort of way. I realise the Twelfth Doctor's personality changed a lot due to messy writing: in series 8 his darker side was clearly emphasised, in series 9 he went full fun uncle, and in series 10 he was the mad professor. But did he ever lose his alien social awkwardness?
Labels: Doctor Who Recent Ponderings Television