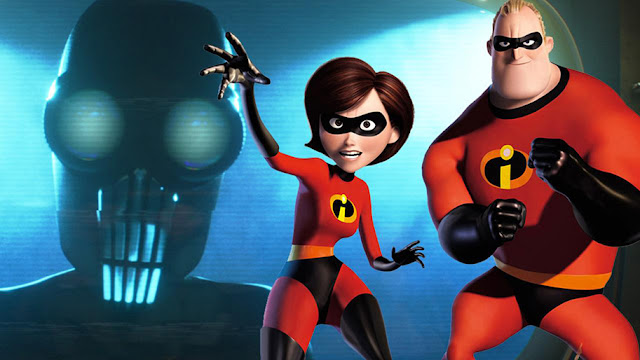 On Tuesday 17th I watched Incredibles 2, the new sequel to the much-loved 2004 Pixar animation The Incredibles. There was much I found mediocre or bland about this sequel - knowing how The Incredibles ended, I was expecting (or rather, "hoping") the sequel would be a fun adventure with the newly formed superhero team fighting off some new supervillain (although I did predict that the Underminer would be got rid of within the first few minutes of the film so the writer - Brad Bird - could be free to tell the story he wanted to tell). Instead, Brad Bird effectively disbanded the Incredibles as a superhero team in order to "reverse time" to repeat the plot and character development of the first film - Incredibles 2 was in many ways a soft reboot.

The main difference was, that instead of Helen (Elastigirl) being left at home to look after the children while Bob (Mr Incredible) went out illegally being a hero (and provoking her jealousy), the same happened vice versa - Bob was now the one being left at home while he enviously watched as Elastigirl went out to be a heroine (a politically correct reversal). The supervillain was once again not a supervillain at all - but a member of the public who hates supers. This time around, spoiler alert, it was a generic-looking middle-aged American WASP lady, which I doubt little boys with their action figures will take to as much as they did with Syndrome. From her very first appearance I knew she was going to turn out to be a secret baddie - her character just seemed to clutter things up; her only possible purpose I felt was that she was the secret villain (also, I've just found out her name was Evelyn Deavor. As in, "Evil Endeavour").

Unlike the first film which had a good balance between the domestic and the super, I felt Incredibles 2 spent too long in the domestic, adult world for children to find it consistently understandable or entertaining (do children really care that much about housework, public relations events, advertising, and politics?).

But regardless of all this, there was one theme in Incredibles 2 which I found highly interesting and important. During the film, the villain's alias "Screenslaver" delivers the following monologue,

"Screenslaver interrupts this programme for an important announcement. Don't bother watching the rest; Elastigirl doesn't save the day, she only postpones her defeat. And while she postpones her defeat, you eat chips and watch her avert problems that you are too lazy to deal with. Superheroes are a part of a brainless desire to replace true experience with simulation. You don't talk, you watch talk shows. You don't play games, you watch game shows. Travel, relationships, risk... every meaningful experience must be packaged and delivered to you to watch at a distance, so you can remain ever-sheltered, ever-passive, ever-ravenous consumers who can't free themselves to rise from their couches to break a sweat. Never anticipate new life. You want superheroes to protect you, and make yourselves ever more powerless in the process. Well, you tell yourselves you're being "looked after", that you're inches from being served and your rights are being upheld, so that the system can keep stealing from you, smiling at you all the while. Go ahead. Send your supers to stop me. Grab your snacks. Watch your screens. And see what happens. You are no longer in control. I am".

It is in this philosophical sense that Incredibles 2 really does live up to its predecessor (which explored the morality of specialness and inequality). And Screenslaver's (an apt name, by the way) ideas really struck me. And they are oh-so-prescient in this age of screens and superheroes. Storytelling, always a large part of the human experience, thanks to screen technology has consumed our very lives. Our days are spent moving from screen to screen - if I wanted to, I could start the day by playing a superhero-themed videogame on a computer, then watch a superhero-themed programme like Daredevil on the television, and watch a Marvel Cinematic Universe film at the pictures in the afternoon! So now more than ever do we need to discuss the morality of storytelling.

I have always adored stories, and my life is full of them. This past week I have been reading Dracula, watching a variety of films at the cinema and at home, and watching programmes like Doctor Who (of course) and Kaiji (an anime a friend is trying to get me into). I also create stories of my own - so much of my time is spent meticulously planning scripts and novels I'm going to pen (and in the case of one or two novels I have already began writing). In October I will begin a Creative Writing course at university which will no doubt involve plenty of professional storytelling. And if I'm successful at that, storytelling may well take up the rest of my life, and be my life's work. So I must address Screenslaver's points and ask myself, am I doing good, to immerse my life in stories and create them myself?

With the upcoming daunting prospects of three years of university and settling down with my other half, the rest of my life seems so set in stone before me. I have to ask myself, is this all there is? All my days I have been satisfying my desire for adventure and real life experiences with stories. That's what stories are - simulations to replace true experience, like Screenslaver said. And so long as our desires for travel, adventure, relationships, risk, etc. are being satisfied by these artificial fictions, we remain satisfied with life enough to get on with the mundane day-to-day work our civilised society requires to sustain itself. For example, a doctor will watch The Incredibles in the evening in order to satisfy his desire for adventure and stay sane in a day otherwise filled with mundane surgical work. But without doctors, we would be living in a far more brutal world, wouldn't we? The mundane work required by civilisation is necessary for humanity to live in comfort, and it will remain so until the days when all doctors are drugged to find their jobs enjoyable, or, even further into the future, when we have mindless robo-doctors instead, and human beings are free from the bondage of work.

So the artificial simulations derided by Screenslaver are vital, if we want to continue living in comfortable civilisation. If everyone on Earth was adventuring all the time, every day, as our simulated fantasy fictional characters like Indiana Jones and Superman do, we would be back to living as nomadic savages in a brutal primitive world. So the storyteller is not yet obsolete. And I don't think he ever will be - even adventurers need to take a break once in a while, have a rest, gather around the campfire, and listen to an adventure story like Beowulf which will entertain them until they recover the energy to have another adventure of their own. And it's not as if we would want to live out every story ourselves anyway - many stories are tragedies rather than comedies - warnings to be avoided rather than ideals to be emulated. For example, who would want to live out "World Enough and Time", an episode of Doctor Who which is a grim warning about the future of medical technology? Thankfully, we have fictional characters to do that so we don't have to. And some things can only be experienced through stories - all the fictional alien planets of Star Trek or the beauty of the fictional Two Trees of Valinor in The Silmarillion, for instance. And some things, while thrilling to observe or fantasise about in stories, such as being pursued by a fictional vampire such as that of Dracula, would be more uncomfortable than enjoyable were one ever to experience them in reality.

Screenslaver is wrong, then.* Storytelling and simulation has its uses, and always will do. But there is something I have taken from him. Some stories can simulate real-life adventures incredibly well. They can be emotionally powerful and downright life-changing, like the real deal. I would put the film Titanic, which I watched for the first time on Monday, into this category. But no matter how well-executed they are, a simulation will never come close to the reality. A real adventure will always have something a simulated adventure will not. It may be fun to watch the Incredibles save the day but it won't be as ecstatic as saving the day yourself. And would you rather watch the exploits of Indiana Jones' fantastic life on your television, or lead a life like Indiana Jones yourself? The answer is obvious.

Therefore, I have decided that, while I have some inescapable obligations to civilised society, such as going to university, and "settling down", I will never stop filling my life with real, unsimulated adventure. I will enjoy university as much as I can, but afterwards me and my other half will go travelling across the world. And I shall live the rest of my days as a happy-go-lucky travelling writer, getting odd jobs here and there, and moving from place to place. A life split between obligation and freedom. This is the ideal. Whether I accomplish it or not is another matter. But in the meantime, dear reader, I would encourage you, if you are persuaded by my line of thinking, to step away from your screen now and again, and aim for something similar.


*Of course he is. He is a fictional character (a villain, in fact) in a simulated story himself.
Labels: Doctor Who Film Television