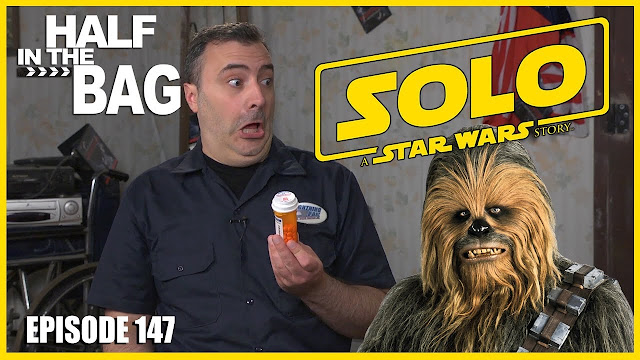 In this Half in the Bag review of Solo: A Star Wars Story, I think I largely agree with Jay Bauman. Like Jay, when I went to see the film I wondered if there was something wrong with the projector due to the bad cinematography (for much of the film I wondered if my friend who I was visiting the cinema with had taken me to a 3D viewing by mistake), and for the first 80% of it I was bored, at one point resorting to trying to read my receipt in the darkness.

It was just old Star Wars tropes re-organised into a different order, and for me the suspense was lacking (if not nonexistent) as I already knew that Han, Chewbacca, etc. would survive. I knew Solo would make the Kessel Run as he said so in A New Hope. Without suspense it was just like watching a series of images from an already known history, rather than watching a new story unfold in real time (which is what any good film should be). This may sound like a generic dig on prequels - but no, I like the concept of prequels, and they can be done well; even if the ending is known, a story can still be entertaining so long as the road to that ending is made as winding and interesting as possible. Solo, being a big dumb action film, was not like that. It only got interesting in the last 20%, after the character Enfys Nest took off her mask - from that point on the plot became more complex, full of conspiracies and betrayals, and started to catch my attention. But then, alas, the film ended.

Surprisingly, Alden Ehrenreich was good as Han. I think Solo would have been far more entertaining as a sort of Solo & Chewie buddy film. They should have just focussed on their relationship (or, additionally, Solo and Lando's relationship), and to make room for this, cut out many of the useless, boring characters - especially L3-37. I just felt she was annoying and cringy, with awkward humour that nobody in our audience laughed at (nobody in our audience, including myself, laughed at any of the jokes or comic relief in Solo, which really prevented the film from being "fun"). While watching I found her voice disjointing as to me she sounded so much like Gwendoline Christie (who plays the similarly pointless character Captain Phasma in Star Wars: The Force Awakens and Star Wars: The Last Jedi), which would of course have been impossible (hence the disjointing feeling). I have since discovered that L3-37 was played by the face of privilege Phoebe Waller-Bridge. As well as being such a dislikeable, grotesque character, it is suggested (spoiler alert, for the rest of this article, really) that L3-37 effectively becomes the computer of the Millennium Falcon. While I like the idea of the rude computer C-3PO refers to in the original trilogy having her origins explained (potentially giving the Falcon a character of her own, and thus intensifying the fondness Han displays for it (and, by extension, our own fondness for it) in the original trilogy (if they had chosen to make the L3-37 character a friend of Han rather than of Lando, that is, and far more likeable)), I just regret that she had to originate in this particular character. Now, forever more, it is canon that the Millennium Falcon, that charming, iconic spaceship, throughout all its adventures with Han, Chewie, Luke, Ben, Leia, and Lando in the Star Wars original trilogy, was L3-37 all along - a predictable caricature of Social Justice Warriors.

What I also find interesting is how little this film seems to have been promoted by Disney. At least in my own experience, this seems to have been the case. I haven't seen any adverts for it except one poster outside a local cinema. It's as if Disney wants to release it quietly, let it make a humble profit, and then allow it to be brushed under the carpet and forgotten. But anyway, those are my two pennies' worth on Solo: A Star Wars Story. Take everything I say with a pinch of salt, as I re-watched all the Star Wars films recently, and the only one I enjoyed (for whatever reason) was Attack of the Clones (The Last Jedi was all right). Maybe I'm just not a Star Wars person anymore.
Labels: Film Star Wars