Peter Rabbit and The Cloverfield Paradox 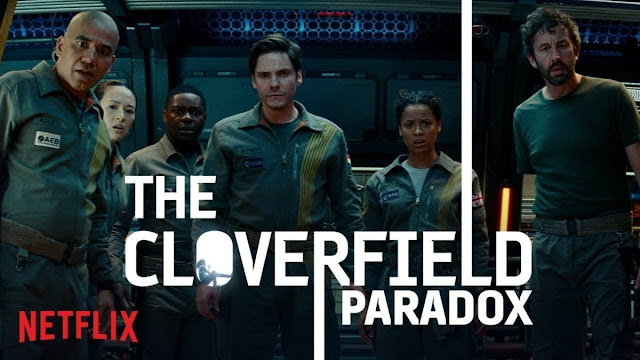 Why does everyone seem to loathe The Cloverfield Paradox while I really enjoyed it? Am I, like one of the characters in the film, from a different dimension? I have thus far found all the Cloverfield films, including this one, thrilling, interesting, thought-provoking, suspenseful, and rewarding. I have been thoroughly invested in all of them, to the point that when I finished each it felt as if I had emerged from a different world (or shall we say a different dimension?).

Now, I understand what J.J. Abrams, their producer, has done. He has brought originally unrelated film productions together into the same franchise in order to benefit off of the title recognition of the original 2008 Cloverfield motion picture (The Cellar became 10 Cloverfield Lane, and God Particle became The Cloverfield Paradox). You may think this is a cynical scam, which it kind of is, but I think it makes for an interesting idea for a film franchise nevertheless.*

A lot of surreal things happen in The Cloverfield Paradox, and I love surreal things! The problem is, they don't have a well-grounded context. Volkov (I admit, he is a xenophobic caricature for these Russia-hating times, played by Aksel Hennie) ends up with worms and a gyroscope in his stomach and has an involuntarily moving eye (and then goes crazy), Mundy's (played likeably by Chris O'Dowd who unfortunately has comic relief which often falls flat) arm gets removed by a wall before taking on a life of its own and revealing the location of said gyroscope, Ernst Schmidt (played by Daniel Brühl, whom I haven't seen since Good Bye, Lenin!) eerily gets released from his temporary prison by nobody (erm, when the plot required it), Mina Jensen (a woman from the dimension they travel to, played by Elizabeth Debicki) gets trapped in a wall, Tam (played by Zhang Ziyi) gets trapped in ice, a wall becomes magnetic, and so on.

The fact that they travelled to an alternate dimension and the resulting spatial discombobulation was what obviously caused Jensen to end up in the wall of the space station (and caused the gyroscope and the worms to end up in Volkov's tummy). We can let that pass. But what on earth happened with the other stuff? Now (and this is how I interpreted it as I watched the film) many of these things could be explained by the “Paradox” which the scientists created when they activated their particle accelerator; somehow, by doing this the scientists messed up the nature of reality. The idea of scientists wrecking the fabric of logic and reality itself is an interesting concept, so it's a deep shame that my explanation is never at all mentioned in the film. Mundy's arm is just left unexplained.

We could potentially explain the magnetic wall, the flood which froze Tam, and Schmidt's prison door as the technical errors of a broken space station (broken due to the transportation to another dimension, I guess?! Apart from the lost gyroscope it doesn't seem broken when it's first transported. Maybe more of that spatial discombobulation which transported the worms into Volkov occurred and scrambled a few wires. Again, this is just me coming up with an explanation for my head-canon. In any case the magnetic wall later indirectly caused the space station to split in half, so that could explain the technical errors which occurred after this) but the crew act as if these technical faults are somehow the result of their continued existence in a parallel dimension (I think at one point the captain of the station, played by David Oyelowo, says “this dimension is tearing us apart” or something along those lines, in direct response to one of these errors). How? This is never explained, and Ava Hamilton's (played by Gugu Mbatha-Raw) decision to stay in the parallel universe (which is supported or at least accepted by everyone, including the captain) seems to run contrary to this. If their unnaturally being in another dimension is at fault for all these disasters then won't Hamilton just continue to be blighted with them for as long as she remains there? Anyway, the “this dimension is tearing us apart” idea could be explained by my Paradox interpretation again, but if this is so it is never explained! J.J. Abrams added a few scenes so that God Particle could be tied into the Cloverfield franchise during production, including one in which a conspiracy theorist named Mark Stambler (played by Donal Logue) explains that the activation of the particle accelerator will cause monsters to appear for some reason (again, this isn't explained either). Why couldn't he have also said, “erm, also, reality will be messed up if you enter a parallel dimension!”. Boom. Then The Cloverfield Paradox would have had a slightly less low rating on Rotten Tomatoes.

I suppose my head-canon explanations really saved the film for me. Without them I would have been just as confused as everybody else, but with them, I really quite enjoyed this latest episode in the franchise.

Footnote (added 09.03.18): “... to me it was, as soon as they did this thing, they broke reality”. Or so said J.J. Abrams in an interview with Empire magazine, I have today discovered. This supports my “messed up reality” Paradox interpretation. There is another explanation which I forgot to mention though, and that is that the reason so many crew members were having horrible things happen to them was because it was just the laws of physics trying to push them out of an alien dimension they didn't belong in, like antibodies trying to get rid of germs.

*Footnote (19.04.18): Spoiler alert! I enjoyed 10 Cloverfield Lane because I didn't yet know that the Cloverfield franchise was going to be a "monster film" series set in the same multiverse; I just assumed it was going to be a pure anthology, which would cross genres too. But anyone who knows that the Cloverfield series is explicitly in the monster genre will have 10 Cloverfield Lane spoilt for them, as the suspense and mystery of the film comes from the question of whether it is a film about alien monsters or not! Now I am firmly of the opinion that it should never have been a Cloverfield flick.

The reason the new film Peter Rabbit, based on the Beatrix Potter children's story of the same name, had such a negative response when its advertisements were first released is because gone are the days when this obnoxious “updating” or Americanisation of classic tales is fashionable. If this film had come out ten years ago it would not have had such a nasty response. But modern audiences have been spoilt by faithful adaptions which relish in being “quaint” or “magical”. Compare The Magic Roundabout (2005) with Paddington 2 (2017) and you'll see what I mean. That said, now that this Peter Rabbit adaption has finally been released, critics and audiences haven't been so harsh on it as was originally expected. I actually predicted that it wouldn't have such a bad reception; from the adverts I have seen, while it looked modern and untraditional, it didn't seem like it was going to be so bad a film (although I haven't actually seen it, nor do I intend to).
Labels: Film